Yesterday I went to the Asterix in Britain exhibition at the London Jewish Museum. Actually it's much more an exhibition about the life and work of René Goscinny, who created Asterix and also Lucky Luke and the scheming grand vizier Iznogoud. Goscinny was born in 1926, the son of Jewish parants who had moved to Paris from Poland; when he was two they moved to Buenos Aires, where he grew up. He comes across as a very humorous individual - in the many photographs, he is either clearly thinking of something funny to say, or has just said it. He always identified as French, but with a special place in his heart for Argentina, which he refers to as le mien - "mine" - in one of the TV interviews in the exhibition.

Goscinny spent most of the late 1940s in New York, so he must have spoken and written English well. Here is the CV he used to try and get drawing jobs in 1948 (I've checked, and the Brooklyn address where he was living is now a vacant yard): 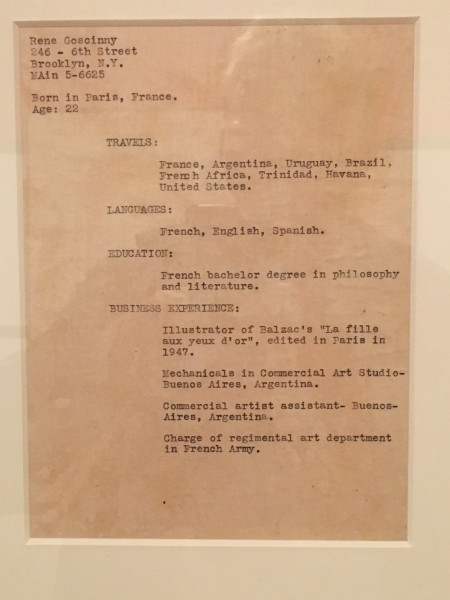 While there he struck up a friendship and creative partnership with Will Elder, Harvey Kurtzman and Larry Siegel, the future creators of Mad Magazine, who wrote him into one of their Playboy strips (about American tourists in Paris) as a manic curly-haired waiter: 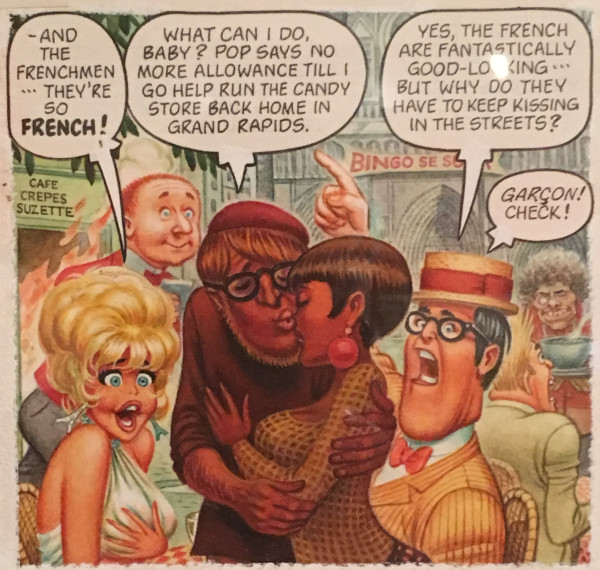 But in 1951 he went back to France and from 1959, together with Albert Uderzo, he wrote Asterix. At the same time he was an activist in and for comics, trying to raise the game of the Franco-Belgian culture to be more relevant to contemporary political issues. It's interesting that a lot of his work was for the Belgian Spirou and Tintin magazines, most notably the creation of Lucky Luke with Morris, who was a Belgian artist.

A couple of peculiar coincidences - he married his wife Gilberte on 26 April 1967, which oddly enough was the day I was born. He died suddenly aged 51, which is the age I am now. (I have outlived him - he did not make it to three months after his birthday, I am almost five months after mine.)

We are all familiar with the Anthea Bell translations of Asterix, but there were a couple of earlier not-really-authorised versions as well - one for Valiant in 1964 had Asterix and Obelix as Little Fred and Big Ed, and another for Ranger (later Look and Learn) moved the action to Ancient Britain rather than Gaul and rechristened Asterix as Beric the Bold. 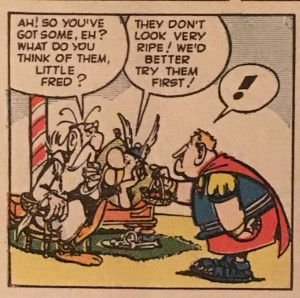 And of course you can dress up as your favourite characters. I went with K and J, here wearing the appropriate helmets. 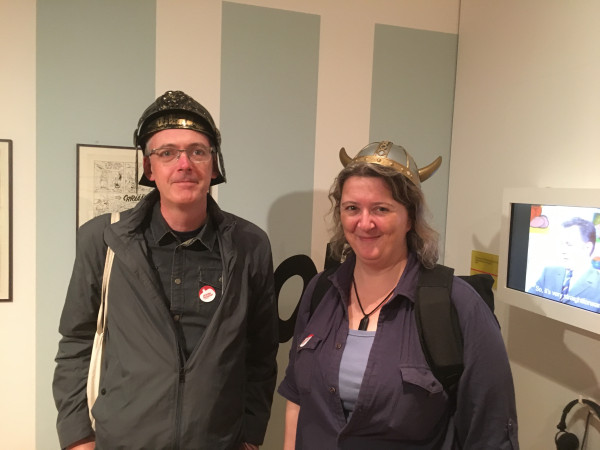 You can get a bit of a sense of the exhibition here from these two promotional videos featuring Charlie Adlard, creator of The Walking Dead and UK Comics Laureate:

The exhibition only runs for another two weeks, until 2 October, so get a move on if you want to see it. It is in the Jewish Museum of London, which itself has a rather fascinating permanent display about London's Jewish history and about Jewish culture. I would certainly never have gone there if it had not been for René Goscinny, but I am glad that I did.
Collapse