Back to my Best Picture Oscar sequence, after the summer break, and it’s The Lost Weekend, which also won Best Director, Best Actor and Best Screenplay, losing out on Best Cinematography (Black and White), Best Music and Best Editing. It was also one of 11 films that won the Grand Prix at Cannes that year, and only one other film since has managed the Cannes/Oscar double. (Marty, which I have not otherwise heard of; we’ll get there in 1955.) 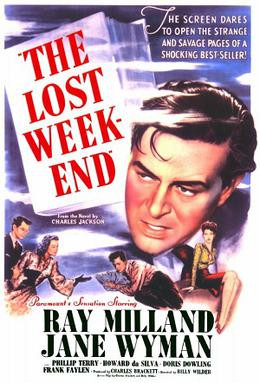 The two IMDB ratings rank The Lost Weekend 8th and 3rd among films of 1945, behind Spellbound and Brief Encounter in both cases. I confess that I had not seen a single other film released in this year. (I have since watched The Picture of Dorian Gray, for Hugo completism.) Here is a trailer, which interestingly leads with the fact that it is based on a best-selling book.

The Lost Weekend is about alcoholism, and the mess that it makes of the lives of alcoholics and of the people around them. Don Birnam, the central character played by Ray Milland (a Welshman successfully sounding American, and winning an Oscar for this performance), desperately and degradingly struggles to get cash to buy booze, having given his brother and his girlfriend the slip for the weekend. 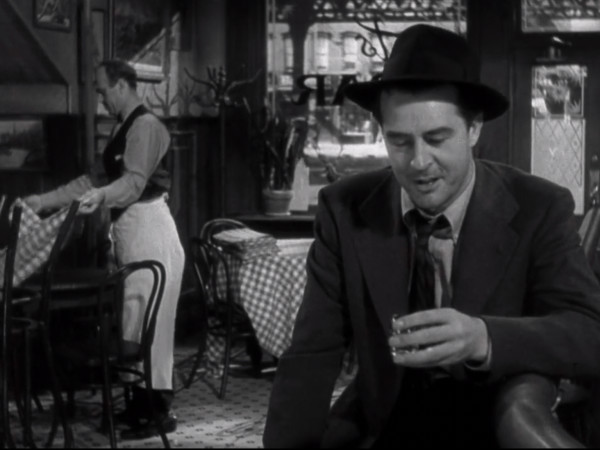 To start with the bits I didn’t like so much, and work upwards. First, in the book, which I’ll get to below, the protagonist is very definitely bisexual, and reflects on his affairs with both men and women. No hint of this whatsoever survives to the film. It’s one of the most blatant examples of gey erasure that I have seen. There is a character, Gloria, played by Doris Dowling, who is clearly a sex worker, or at least as clearly as the Code would allow.

Jane Wyman, who was at the time married to fellow actor Ronald Reagan, is very good as Don’s girlfriend Helen and gets a lot of great lines. (Her mother is played by Lilian Fontaine, whose two daughters Joan Fontaine and Olivia de Havilland also appeared in Oscar-winning films, Rebecca and Gone with the Wind.) But Helen’s storyline is one of standing by her man, no matter how awfully he behaves. In fact her relationship with Don is deeply toxic and controlled by his addiction. 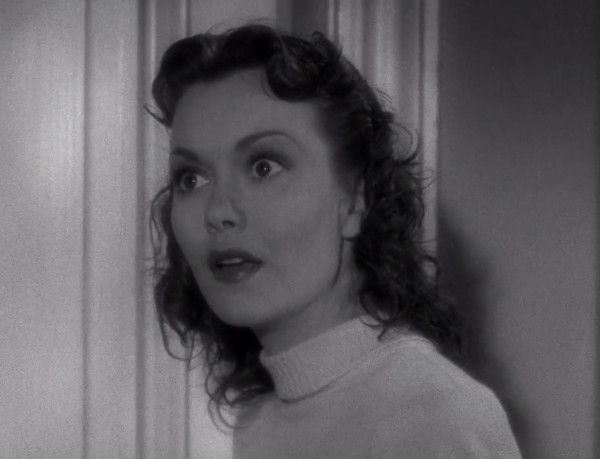 She is not quite an enabler, but I would hope that a remake of the story today would look a bit more sensitively at how those who love addicts can sometimes make matters worse. Also, of course, because this is a Hollywood film and the conventions must be observed, Don is redeemed by the strength of her lurve. “We're both trying, Don. You're trying not to drink, and I'm trying not to love you.” 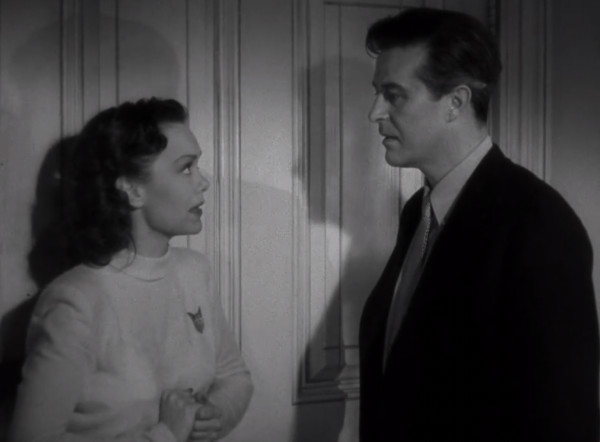 Among many memorable scenes, the segment set in the alcoholic ward of the hospital stands out for its bleakness - Frank Faylen as Bim Nolan, the nurse who explains to Don just how bad his situation is. “We had a peek of your blood. Straight apple jack. 96 proof. ... You're an alky. You'll come back. They all do. Him, for instance. Shows up every month. Just like the gas bill. ... You know that stuff about pink elephants? That's bunk. It's little animals. Little tiny turkeys in straw hats. Midget monkeys coming through the key holes. See that guy over there? With him, its beetles. Come the night, he sees beetles crawling all over him. Has to be dark though.” 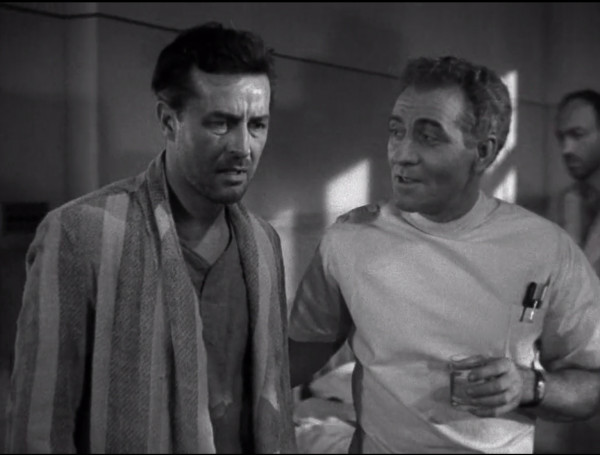 Other memorable moments include the La Traviata performance where Don becomes obsessed by the drinks on stage during the Drinking Song; the desperate search for an open pawnbroker on Yom Kippur (the Irish pawnbrokers close in solidarity with the Jews, who return the favour on St Patrick’s Day); and Don’s hallucination of a bat flying around his room that then attacks a mouse. 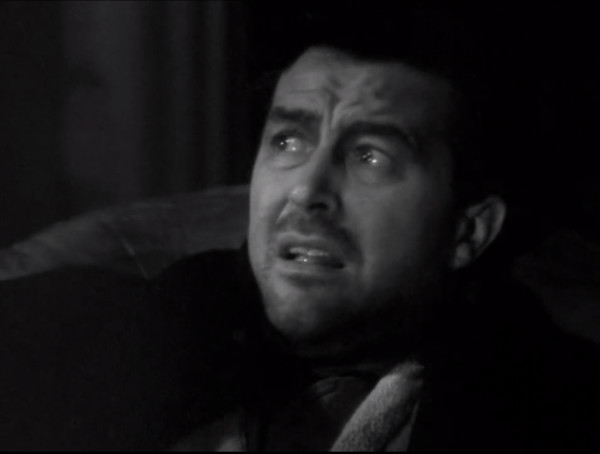 I finally have to note the use of the theremin in Miklós Rózsa’s incidnental music, two decades before Star Trek; it gives an amazing otherworldly feel to Don’s alcohol-dazed perceptions.

This is a grim film to watch, but I think also a great film. I am ranking it fourth in my list so far, behind All Quiet on the Western Front but ahead of You Can’t Take It With You. You can get it here.

Next is The Best Years Of Our Lives. I know nothing about it.

The book of The Lost Weekend, by Charles L. Jackson, is apparently solidly autobiographical. Second paragraph of third chapter:

He listened to the ’phone. It rang six or seven times and then stopped. He closed his eyes, relieved.

It’s as grim reading as the film is grim viewing, tight third throughout, vividly realised, and without the film’s happy ending.

As noted above, Don Birnam is bisexual in the original novel, but firmly straight on screen; in the book, his ambiguous sexuality is part of the root of his addiction - which of course rather ignores the fact that in real life, many alcoholics are entirely secure in their sexual identities; but I guess Jackson had to tell the story he himself knew best.

The penultimate section of the book has Don hallucinating at his girlfriend Helen’s apartment, rather than his own - this gives a stronger sense of displacement, and of course reinforces the point that when he does get home he starts drinking again, ending the book in the same place he started, only worse off.

Several of the great visuals of the film (including the opera scene) were written for the screen and were not in the original book. The passage in the hospital is memorable in a very different way in the book - the nurse, Bim Nolan, hints at seducing Don as part of his treatment, though Don is not really interested either in being seduced or in being treated. (In fairness this is hinted at on screen, but it is text rather than subtext in the original.)

Along with the films that won the Oscar for Best Picture, I am going to watch Hugo and Nebula winning dramatic presentations when we get there. 1946 is the first year where I hadn’t already seen the Retro Hugo winner for that year (released in 1945, the same as The Lost Weekend). The previous years were: 1939 (The War of the Worlds), 1941 (Pinocchio and Fantasia) and 1943 (Bambi).

Although there are four earlier winners of a Retro Hugo for Best Dramatic Presentation, the 1946 Retro Hugos were the first to be given out, on the 50th anniversary of the 1946 Worldcon in 1996. (The 1939, 1941 and 1943 awards were made 75 years on, in 2014, 2016 and 2018; and we will do 1944 Retro Hugos next year in Dublin.) The other finalists were Blithe Spirit, The Body Snatcher, The Horn Blows at Midnight and House of Dracula. IMDB users also rank The Picture of Dorian Gray ahead of the others. I have not seen any of them - in fact I had not seen any films made in 1945 at all until I watched The Lost Weekend a couple of days before The Picture of Dorian Gray.

I am a huge fan of the original Oscar Wilde novel, and it’s delightful to see it transformed to the screen so faithfully - not so much interms of plot, but in terms of aesthetic. The film won the Oscar for Best Cinematography, partly on foot of the eponymous portrait, the only moment of colour in the black and white film:

But also I enjoyed very much watching Angela Lansbury, aged 20, in her second screen role after Gaslight, stealing every scene she is in, clearly recognisable as the future star of Murder She Wrote. 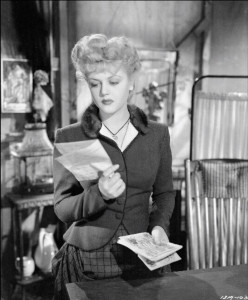 And George Sanders is having a blast as the Oscar Wilde character, Lord Henry Wotton (on the left here with Hurd Hatfield as Dorian Gray and Lowell Gilmore as the painter Basil Hallward; this was the peak of both their careers): 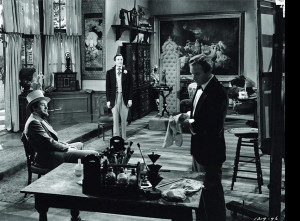 The uncredited narrator is Sir Cedric Hardwicke, often carrying the story while Hatfield is acting silently agonised as Gray. He threw me a bit in the first sentence by pronouncing “secretive” as /səˈkriːtɪv/ instead of /ˈsiːkrətɪv/, ie with the stress and long vowel in the second syllable rather than the first. Polls of my followers on both Twitter and Facebook indicate that this is a minority choice.

More negatively, what is striking is that just as with The Lost Weekend, the gay elements of the original are very much downplayed. It’s not as bad as The Lost Weekend - Hurd Hatfield is I think definitely coded as gay - and one of the delights of the film is that Dorian Gray’s debauchery is deliciously hinted at rather than shown - but it’s another example of erasure.

Even so, I enjoyed watching it. You can get it here.

The next Retro Hugo for Dramatic Presentation went to Destination Moon, in 2001 for 1951.