What interests me is the relationship between this classic Homeric moment of silencing a woman and some of the ways in which women's voices are not publicly heard in our own contemporary culture, and in our own politics from the front bench to the shop floor. It is a well-known deafness that's nicely parodied in an old Punch cartoon: 'That's an excellent suggestion, Miss Triggs. Perhaps one of the men here would like to make it'. I want to reflect on how it might relate to the abuse that many women who do speak out are subjected to even now, and one of the questions at the back of my mind is the connection between publicly speaking out in support of a female logo on a banknote, Twitter threats of rape and decapitation, and Telemachus' put-down of Penelope. 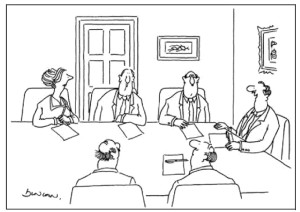 'That's an excellent suggestion, Miss Triggs. Perhaps one of the men here would like to make it.'
2. Almost thirty years ago the cartoonist Riana Duncan captured the sexist atmosphere of the committee or the boardroom.
There is hardly a woman who has opened her mouth at a meeting and not had, at some time or other, the 'Miss Triggs treatment'.

There are all kinds of irony to this tale. One joke that Perkins Gilman plays throughout is that the women simply don’t recognise their own achievements. They have independently created an exemplary state, one to be proud of, but when confronted by their three uninvited male visitors, who lie somewhere on the spectrum between spineless and scumbag, they tend to defer to the men’s competence, knowledge and expertise; and they are slightly in awe of the male world outside. Although they have made a utopia, they think they have messed it all up.

Though billed as a manifesto, this is actually a collection of two lectures delivered by Beard for the London Review of Books in 2014 and 2017, looking backward rather than forward - but looking very clearly. It is powerful, well-founded stuff, looking back at how women's voices have been marginalised from the political discourse of power since at least the days of Homer. It is brief but punchy - a telling illustration shows how women aspiring to power are always caricatured as Medusa (and men never are). She ties this into the phenomenon of internet trolling, which is much more visibly directed against vocal women than men. Many good points made very effectively and swiftly. Well worth getting, and you can get it here.

This was actually second on my non-fiction pile after Byzantium by Judith Herrin, but someone else was reading that so I skipped ahead to Women & Power (and did not regret doing so).