On Wenlock Edge the wood's in trouble;
His forest fleece the Wrekin heaves;
The gale, it plies the saplings double,
And thick on Severn snow the leaves.

'Twould blow like this through holt and hanger
When Uricon the city stood:
'Tis the old wind in the old anger,
But then it threshed another wood.

Then, 'twas before my time, the Roman
At yonder heaving hill would stare:
The blood that warms an English yeoman,
The thoughts that hurt him, they were there.

There, like the wind through woods in riot,
Through him the gale of life blew high;
The tree of man was never quiet:
Then 'twas the Roman, now 'tis I.

The gale, it plies the saplings double,
It blows so hard, 'twill soon be gone:
To-day the Roman and his trouble
Are ashes under Uricon. 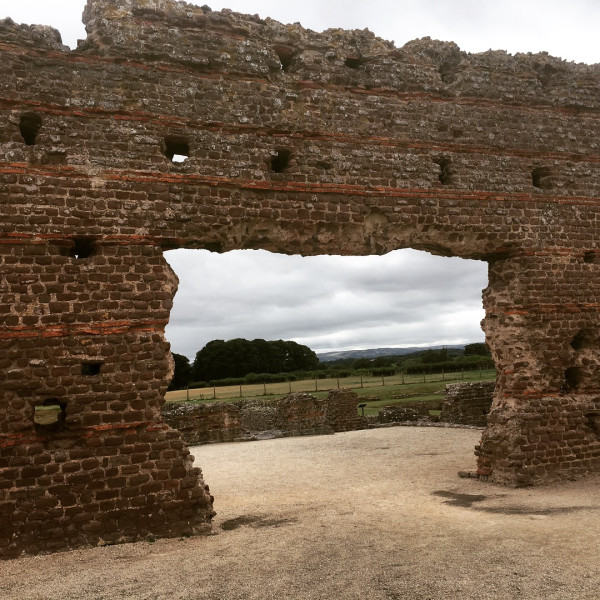 It lieth low near merry England's heart
Like a long-buried sin; and Englishmen
Forget that in its death their sires had part.
And, like a sin, Time lays it bare again
To tell of races wronged,
And ancient glories suddenly overcast,
And treasures flung to fire and rabble wrath.
If thou hast ever longed
To lift the gloomy curtain of Time Past,
And spy the secret things that Hades hath,
Here through this riven ground take such a view.
The dust, that fell unnoted as a dew,
Wrapped the dead city's face like mummy-cloth:
All is as was: except for worm and moth.

Since Jove was worshipped under Wrekin's shade
Or Latin phrase was writ in Shropshire stone,
Since Druid chaunts desponded in this glade
Or Tuscan general called that field his own,
How long ago? How long? 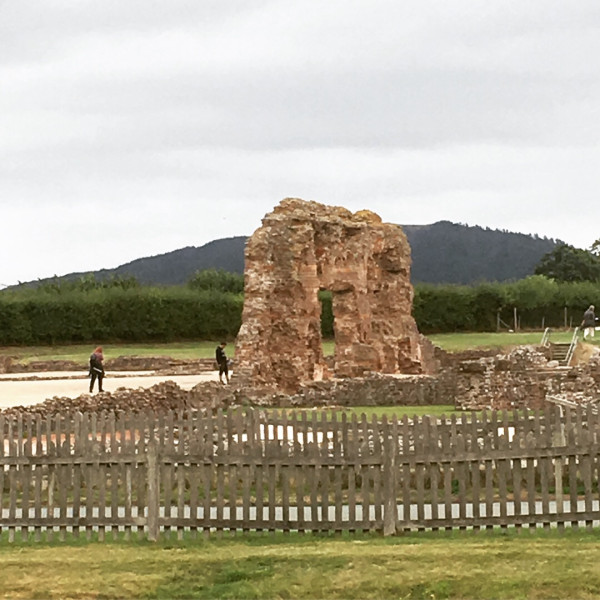 From "Rome and Turnips", by Charles Dickens:

Excavations at Wroxeter, the buried city of Uriconium. There was attraction in the news of these fresh diggings. Off we set, therefore. Let it be said, rather, off I set; for there was a time when I, too, was included in the toast of "All Friends Round the Wrekin." I have stood upon that large dropping from the spade of the arch enemy. He would block up the Severn with it, would he? I have stood on it in rainy and fair weather, at midnight and midnoon. I have threaded its needle's eye, dipped in its mystic eagle's bowl, seen from its top the spreading of the dawn on summer mornings; and on many a winter's night, when riding at its foot, laughed at the dismal failure of its very best efforts to look inhospitable. If there is a lump of earth in the inanimate world that I can call my friend, it is old Wrekin. Now antiquaries may read through their spectacles of ancient Uriconium. "What is that ?" I said to myself, "but old Wrekin over again." The Romans had no W or K, they were obliged to write down Wrekin Urecin; ium is only the addendum, which says there's the name of a place. Vowels are pronounced and altered in all sorts of ways : so ancient Uriconium is old Wrekinium. Alas! a nursling of my poor friend's lying dead and buried at his feet.

When I heard about the disinterment, I remembered the grave well. There was a sort of colossal ruined headstone over it, called the Old Wall, and that was all that marked the resting-place of my friend's first and only child. Wroxeter is but a puny little changeling. Merit it has; it neither sits upon nor comes too near the grave of the dead city.

The Romans had a sensible way of accepting all the names of places that they found in conquered countries, altering them as little as might be for the necessary adaptation to their Latin throats and tongues. Some of the legionaries in Britain, who had new cities to name, seem to have taken words that pleasantly reminded them of their own country; but the common rule was followed when a town at the base of an important hill, which was a landmark throughout the surrounding region, took the name of the hill, and became Uricon-ium or Wrekin town. More great hills than this one were called Wrekin by the British. Urachean means heaps of earth; and that was the first form of the word Wrekin. The Romans did not pronounce badly when they spelt it - for they had two forms Virocon or Uricon. And it happens that, when they called their place Uricon-ium, the British name and Roman ending, meant the town under a heap of earth. Prophecy was in the word. There is no doubt now about the heap of earth over the town shovels are in it ; and there is no doubt about the Roman ending.

That heap of earth, on the old Roman town concealing all its skeletons, except, as it may be, a bony index finger represented by the stones of the Old Wall, is resolute to speak. In spite of all the efforts made to stop its mouth with turnip-crops and com for it is arable land upon the surface it cries out, "Look into me. Pay the men for their turnips, and away with them. Dig me, I say, for the knowledge I contain." 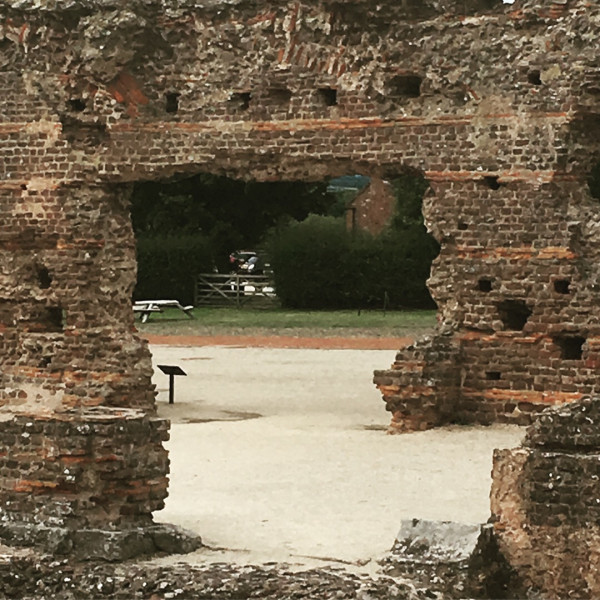 THE BATHS BASILICA
Wroxeter's bathhouse is a large and impressive example of a design that could be found in other towns across the north-western provinces of the Roman Empire. Because of the cooler climate here, the usual open-air exercise yard, found in Mediterranean countries, was not appropriate. Instead, a large open hall — the baths basilica — was provided. This was an impressive space, designed to awe the visitor, its appearance can easily be reconstructed at Wroxeter because of the survival of the Old Work. This wall, standing 7m high, was the south wall of the basilica. In front of it, in the yellow gravelled area, are round pink discs that mark where the columns of the basilica stood. These were as high as the Old Work and timber beams ran from them to the Old Work wall, supporting a sloping roof above. Above the columns stood another wall, the height and thickness of the Old Work but pierced at the upper level by large, round-headed windows. These shed light into the interior of the basilica, just as they do in a cathedral of similar design. Above this was the pitched roof of the basilica, its apex two and a half times the height of the Old Work, or about 18m. 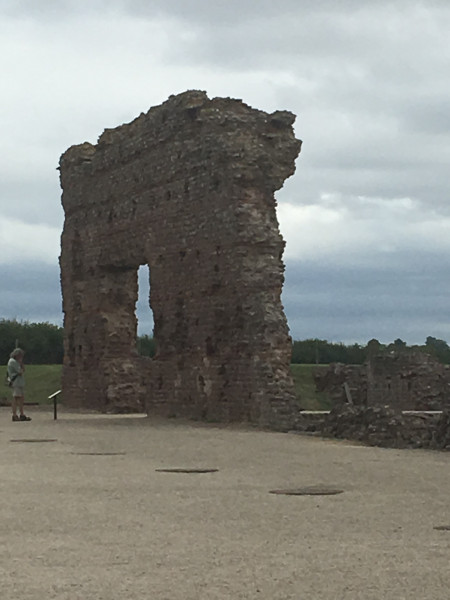 I have wanted to visit Wroxeter since I was a child, knowing that it was the end of Watling Street, the Roman road from London to what is now Wales. A gruesomely early start to our travel last Saturday meant that unusually we had some time to spare in the Midlands of England, and I realised that Wroxeter was only a few minutes off our route. Fortunately I persuaded the rest of our group that this would be a worthwhile excursion. (There are some advantages to doing most of the driving.)

Viroconium or Uriconium is reckoned to have been the fourth largest town in Roman Britain (I guess after London, York and Colchester). For many centuries the only visible remains were "The Old Work", the large wall which once stood isolated in a field, but turns out to have been part of the basilica containing the public baths. Since the 1850s, archaeologists have uncovered more details, including the foundations of many buildings and some impressive material remains, notably a big ornate silver mirror. Compared with, say, Tongeren near here, or other cities farther south and east, there isn't a lot in Wroxeter; but they have done a good job of presenting what they have.

Roger H. White's little guide book is a nice summary, explaining to the visitor what we are actually seeing and situating it in the wider context of our knowledge of Roman Britain. Contrary to earlier ideas, it is now thought (though not by everyone) that the city remained inhabited, if more sparsely, for two centuries after the fall of the Roman Empire, before plague and war drove the last inhabitants out. The local church was built in Saxon times from Roman stone. Now the custodians have allowed a replica Roman house to be built across the road from the foundations of the city centre commercial building complex. 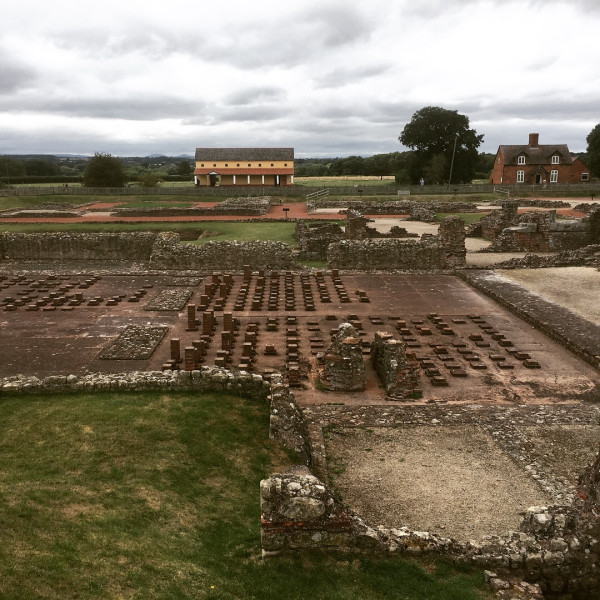 All slightly eerie, but very fascinating. Recommended, if you are in that part of England.
Collapse