We went to the Ulster Museum yesterday, where there is a very good and full exhibition about the Troubles. One of the exhibits is a map from the Roads Service from 1979 showing exactly which bits of Belfast were closed off for security reasons. 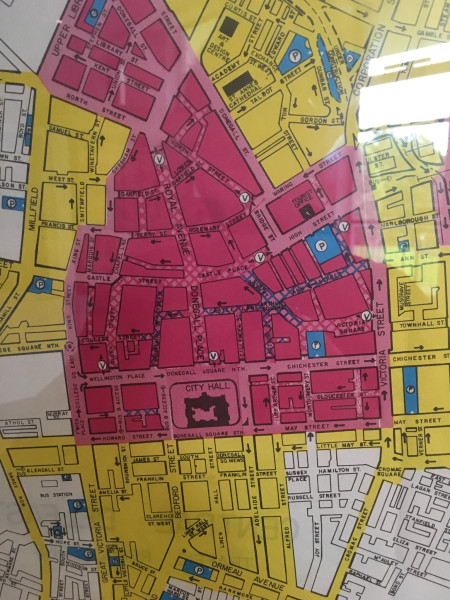 What I found interesting is the similarity with the wall built around Belfast in the 1640s, as mapped by Gillespie and Royle. 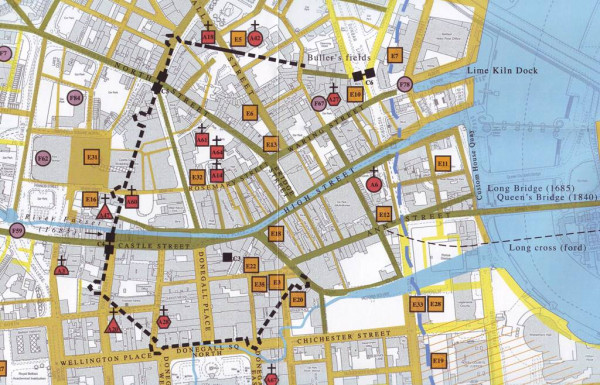 The gates marked on Castle Street and North Street are in exactly the same place as two of the security barriers of 330 years later. It would have been perfect if they actually coincided with vehicle access points, but they don’t quite - the North Street gate is next to (but on on) the site of the later access point at the northern end of Royal Avenue, and to reach Castle Street in the 1970s you would need to go in at the southern end of Queen Street. There was another gate in the 1640s on what was Corporation Street in the 1970s but is now the Dunbar Link.

I tried drawing the two on one map, but the 1970s security zone looked a little too phallic.

It is interesting that the commercial centre of Belfast had shifted so little in a third of a millennium. The core areas of economic activity in, say, London and Dublin would have moved a lot between the 1640s and 1970s. But I guess that is less true of some other cities I know well, like Brussels or Leuven. (Or Oxford or Cambridge, for that matter.)

There is no trace above ground now of the 1640s fortifications, and little enough from the 1970s. Long may it remain so.
Collapse