Far below him, the cars in the front ranks of the parking-lot were spattered with broken eggs, wine and melted ice-cream. A dozen windscreens had been knocked out by falling bottles. Even at this early hour, at least twenty of Laing's fellow residents were standing on their balconies, gazing down at the debris gathering at the cliff-foot.

I bought this, appropriately enough, at the Barbican exhibition last year. It’s a dystopian story of middle-class life in a tower block degenerating into a primitive society ruled by violence and caste division, with a small contribution from the media - or rather from the journalist who is one of the residents who shares the social degeneration. It is a bit Lord of the Flies for grownups - but at the same time, it is vivid and frightening; a direct riposte perhaps to the cosy catastrophes of John Wyndham, and surely inspiration for Judge Dredd who came shortly afterwards. Of course, this is partly a reimagining of Ballard’s experiences in WW2 prison camps, but it’s also interesting how much the building itself is a character in the book. I see that the film was mostly shot in good old Bangor, Co Down; I must give it a try. You can get the book here.

This was my top unread book acquired last year. Next on that list is Comet in Moominland, by Tove Jansson (which of course I have read, but long ago).

Third poem, in full, with illustrations:

DALEK
(after ‘Furry Bear’)
If I were a Dalek
And a big Dalek too
I shouldn't much care
If it froze or snew.

I shouldn't much mind
If it rained acid
I'd be all lead-lined
With a coat like his. 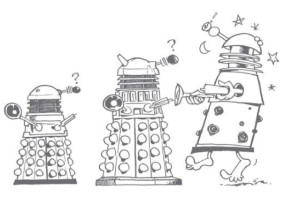 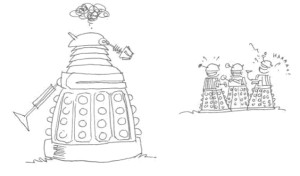 For I'd have no eyes just a stalk to see
And I'd have no legs but I'd glide nicely
There'd be no arms but my big gun would kill
And there'd be a sucker which would, um, still—
I would have no heart and I'd have no soul
Which would help when being lonely takes its toll.

If I were a Dalek
And a big Dalek too
I shouldn't much care
What happened to you.

You could run away
You could say goodbye
And I'd be all lead-lined
With a coat like his.

A short collection of poems by James Goss, with illustrations by former show-runner Russell T. Davis, all more or less based on similar poems by A.A. Milne. The concept is very cute, and I like that fact that the subject matter of the poems bridges both Old Who and New Who. James Goss is one of my favourite Who writers. However, it didn’t entirely work for me - perhaps it is too long since I last read Now We Are Six. You can get it here.