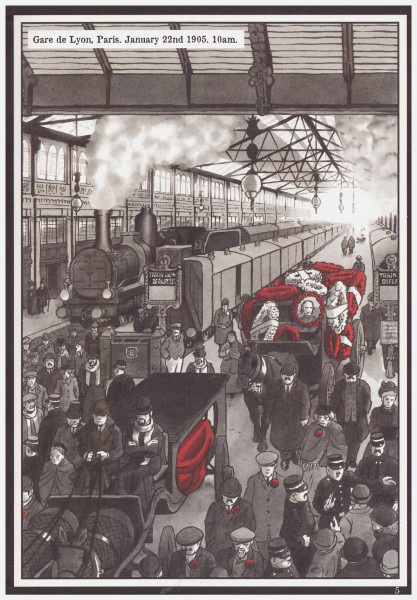 A biography in graphic form of French revolutionary feminist Louise Michel, who, to my shame, I had not previously heard of. Actually it is more of a portrait than a biography, concentrating on two particular periods of her life - the Paris Commune, and her subsequent exile in New Caledonia where she horrified and disgusted her comrades by taking sides with the indigenous islanders. The argument is interestingly made that her politics links with the Utopian literature of the day - Edward Bellamy in particular, also Charlotte Perkins Gilman appears in the framing narrative, also Victor Hugo and H.G. Wells. (Also, a chap who jumped off the Eiffel Tower which is less of an obvious fit.) Bryan Talbot’s art is subdued but also angry in places. I learned a lot. You can get it here.

This was the top unread comic on my shelves. Next is Dark Satanic Mills, by Marcus Sedgwick.

Current
In the Shadow of Young Girls in Flower, by Marcel Proust
The Way of Kings, by Brandon Sanderson
The Little Stranger, by Sarah Waters

Last books finished
The Martian Inca, by Ian Watson
The Politics of Climate Change, by Anthony Giddens
High-Rise, by J. G. Ballard
Now We Are Six Hundred, by James Goss, illustrated by Russell T. Davies
The Life of Our Lord, by Charles Dickens
“Ill Met in Lankhmar”, by Fritz Leiber
The Region Between, by Harlan Ellison