'A croc wrestler? Never!' snorted the Doctor in disbelief.

A rather odd little book from 1982, featuring the Fifth Doctor, Nyssa and Tegan, woefully characterised and going on an exciting educational journey to learn about extinct animals and early humans. (Why Nyssa should have any interest in some other planet's prehistory or paleontology is not addressed.) The dinosaurs of the title occupy only the first eight pages of ninety or so. The author also wrote one of the less impressive of the 1985/6 game books. There are illustrations by Rowan Barnes-Murphy. 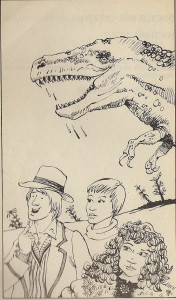 She has gone on to better things.