”But the Ulster men, father, didn’t they fall out with the others?”

Available for free at the UCD archive, this is an anonymous near-future Awful Warning, written in 1885, of the inevitable consequences if Irish Home Rule were to be passed by Westminster and implemented. Over the course of 72 pages, the evil Irish nationalists seize control of the judiciary, fiscal system and security forces, gallant Ulster resists despite getting no help from London, and in a climactic battle in The Glen in Newry (now a residential street, then a gentleman’s estate) the forces of Nationalism are licked and the Home Rule government collapses, a grateful people welcoming the return of firm government from London.

Several points of interest here. In real life, The Glen in Newry belonged to Henry Barcroft, whose son Joseph (later Sir Joseph) married Mary Agnetta “Minnie” Ball, the daughter of my favourite Victorian astronomer, Sir Robert Ball. It makes me wonder if Robert Ball himself, vehemently anti-Home Rule, might have been the author of the pamphlet. However, I don’t think the timing works out; Joseph and Minnie were born in 1872 and 1875 respectively, and married in 1903, so it’s not obvious that their parents would have known each other in 1885.

I was also interested by the Home Rulers’ fictional playbook for seizing control, and wondered what real-world examples the author had in mind of autonomous governments throwing off the shackles of the metropolitan power. Perhaps the independence of the Spanish colonies in the early 19th century, or the growing autonomy of the Balkan states? It is a more sophisticated picture than I had expected.

Finally, the scenes of troops arriving from both sides by rail at a key nodal point to participate in a battle of sniping across a well-covered slope were well realised, and again I wondered what model was in the author’s mind. It is reminiscent of some of the American Civil War engagements, in that the location of the railway lines is such an important factor in the mobility of the forces. There may be European examples that I’m unaware of, perhaps from the Franco-Prussian war.

There were a number of books and pamphlets set in a fictional future Home Rule Ireland (see here, here and here); this is one of the more literate ones. 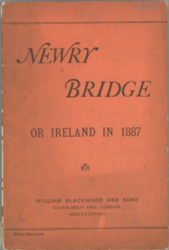