I grabbed the chance of a half-day during a work visit to London last week to go to Oxford and see the Tolkien exhibition in the Bodleian (strictly speaking the Weston building). It runs until the end of September, and it is free, though you would be well advised to book ahead. I am only going to hit on the highlights here; Robin Reid, who is actually a professional Tolkien scholar, has done a longer write-up for File 770.

The whole thing is one big room, with a strong emphasis on Tolkien’s art. I have read a lot about and by Tolkien over the years, but had never quite grasped how fundamental his visual imagination was to his creativity - you really need a display like this to appreciate it. He drew all the time, all his life - we have childhood drawings of his family, and doodles on the Times crosswords from his old age. Some of the illustrations were familiar to me, others less so. The exhibit that really blew my mind was Tolkien’s three carefully constructed pages from the Book of Mazarbul, which he had prepared for the original publication of The Lord of the Rings, only for the publisher to decline to use them on the (understandable) grounds of cost. I think I knew that these existed, but had no idea of how elaborate they are. Here is the third one: 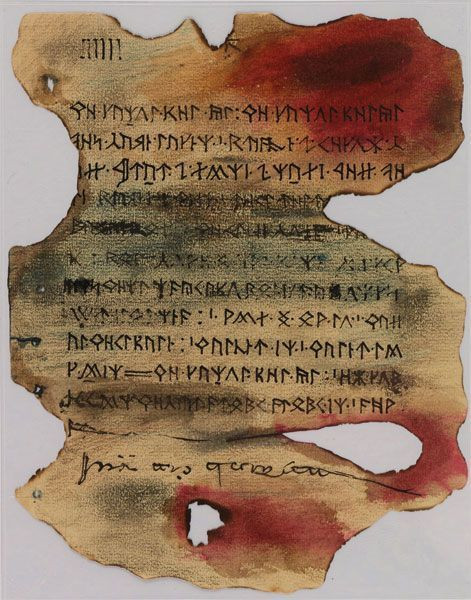 ‘It is grim reading,’ [Gandalf] said. ‘I fear their end was cruel. Listen! We cannot get out. We cannot get out. They have taken the Bridge and second hall. Frár and Lóni and Náli fell there. Then there are four lines smeared so that I can only read went 5 days ago. The last lines run the pool is up to the wall at Westgate. The Watcher in the Water took Óin. We cannot get out. The end comes, and then drums, drums in the deep. I wonder what that means. The last thing written is in a trailing scrawl of elf-letters: they are coming. There is nothing more.’

One other picture that I knew, but that somehow acquired new life for me when I saw the original, is the original conversation between the invisible Bilbo and Smaug. There is something very interesting in Smaug’s face and posture - he has some fox in him, as well as reptile. 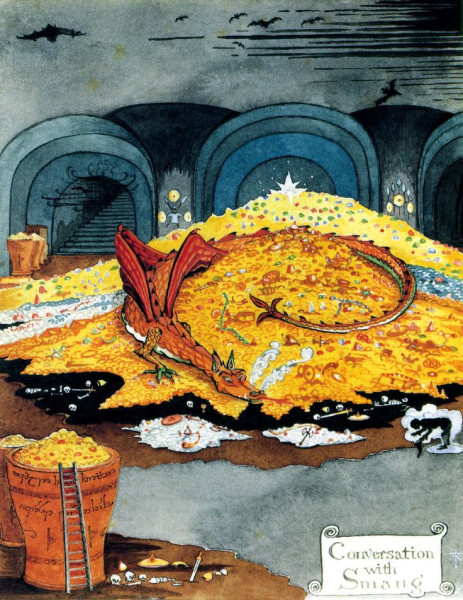 There are a lot of other personal letters and documents which fill out Tolkien’s background, including the report from the sub-rector at Exeter College that he was “v. lazy” and warned that he might lose his scholarship, and then that he was “much improved”. 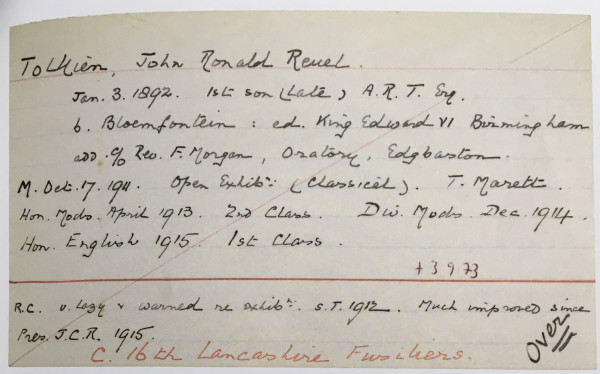 And there are fan letters too, including from President Johnson’s daughter, from Princess (now Queen) Margarethe of Denmark, and (this one really grabbed me) a 19-year-old Terry Pratchett. 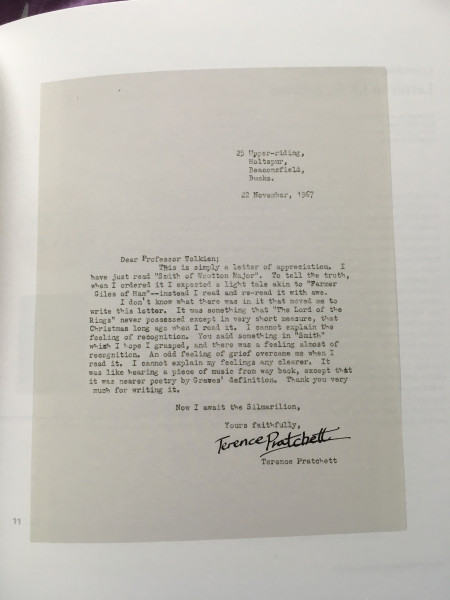 The whole thing is great. My one niggle is that the internal layout didn’t seem very clear - each section is fine, but I didn’t understand the overall plan. Of course, with so much material, it’s nice just to see it all.