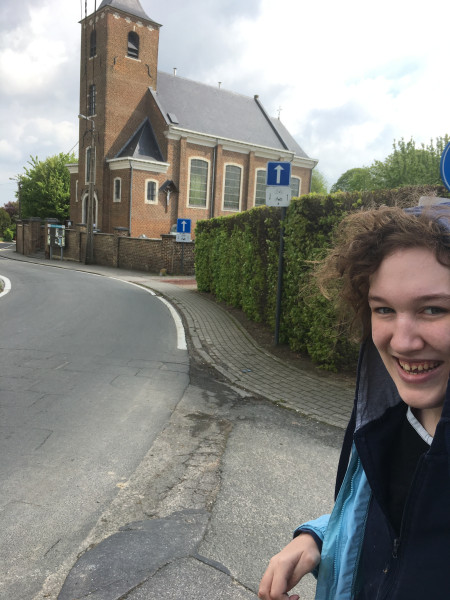 I hadn't seen B for a while, so visited this morning to take advantage of the good weather, and took her out on a walk in the Rozendaalbeek valley around Vissenaken, about a quarter of an hour's drive from where she lives. It's quite nicely laid out; you start in the car park of the St Maartenskerk (an 18th century building replacing a place of ancient pilgrimage; the cult of St Martin is of course an interesting medieval topic in its own right).

Spring has firmly taken root and summer is not too far off, despite the weekend's cold and rain, and B had a spring in her step. 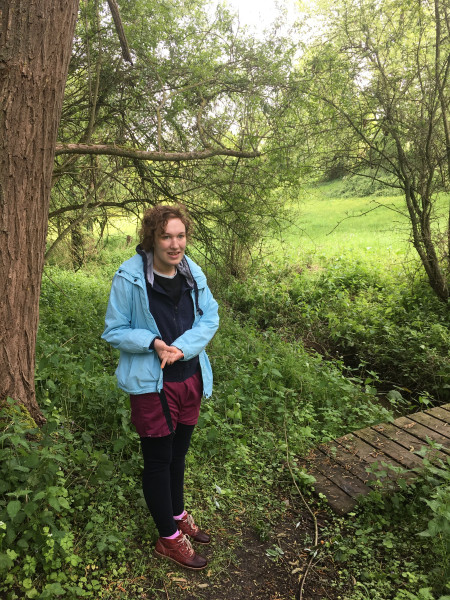 We encountered a couple of surprising religious pieces of art as we walked. The first is the Holy Well of St Hymelinus, constructed in 1817. St Hymelinus is the local saint of Vissenaken, unknown anywhere else. He is reported to have visited very briefly in 681, on his way back to his native land from a pilgrimage to Rome. He is described as a Scot, which at that date probably means that he was Irish. Passing by the well, he asked a local girl for a drink from it. She warned him that there was plague in the water, but he insisted and the water that she gave him was miraculously transformed into wine. Sadly, St Hymelinus died a few days later of plague anyway. When he died, the church bells rang spontaneously, and the ground miraculously opened to provide his grave. It takes all sorts.

Heading back to the church, we came across this rather impressive piece: It's a chunky big shrine to Our Lady of Sorrow, created in 1938 by the sculptor Albert Poels, whose best-known work is the statue of the Lange Wapper in his native Antwerp. It looks very 1930s (I'm not sure if you can see that here).

Not that B cares particularly; but she seemed to have enjoyed the walk.