We were talking about the rise of European populism over the past fifteen years and how 2002 was the year that changed everything. Political systems dominated by competition between a main party of the centre-left and the centre-right had been slowly fraying in much of continental Europe in the last decades of the twentieth century, with proportional representation making it easier for small parties to eat into the voter base of the big ones.

I had an unnerving experience one evening in February. I was chatting with a friend (from Montenegro) about politics, and she asked me if I had read this book. I was about to say that I hadn't, when my phone buzzed with a WhatsApp message from another friend (from Hong Kong) asking me exactly the same question. Clearly it was fate.

Well, it's a rather annoying book, frankly. Part of this is Goodhart’s tendency to unnecessarily resort to ad hominem remarks. In the first chapter he reports on a conversation with Gus O’Donnell, then the UK’s most senior civil servant, and Mark Thompson, then the Director-General of the BBC, in which both expressed the view that global welfare matters more than national welfare. Goodhart obviously disagrees, which is fair enough, but then he says that both men’s views “may reflect their moderately devout Catholic upbringings”. Yep, Catholics, the enemy within. In a more recent review he said that for another writer, understanding the concerns of populists “may be hard for the grandson of a Holocaust survivor raised in Germany surrounded by the ghosts of the past”; and subsequently showed no comprehension at all for how offensive this was. Well, I guess that’s all you can expect from an Old Etonian who is the son of a Conservative MP.

Goodhart divides the world (well, really, white English people, because nobody else much matters) into Anywheres and Somewheres. The Brexit vote is the clear cleavage between them. Anywheres are smug intellectual cosmopolitan elites like me; Somewheres are salt of the earth types, loyal to their particular locality, who have been left behind by globalisation. The fact that along with most of my cosmopolitan friends and colleagues, I remain strongly loyal to my origins in various ways, is not relevant; the fact that Scotland and the Republic of Ireland, not notably places where local sentiment is weak, are strongly pro-EU is also ignored. But I do have to admit that the most telling piece of evidence from the Brexit referendum, one which I have cited myself in several lectures and presentations, gives some support for Goodhart: this is Lord Ashcroft's June 2016 poll of how those who feel strongly one way or the other on certain grand global issues had split between Leave and Remain. 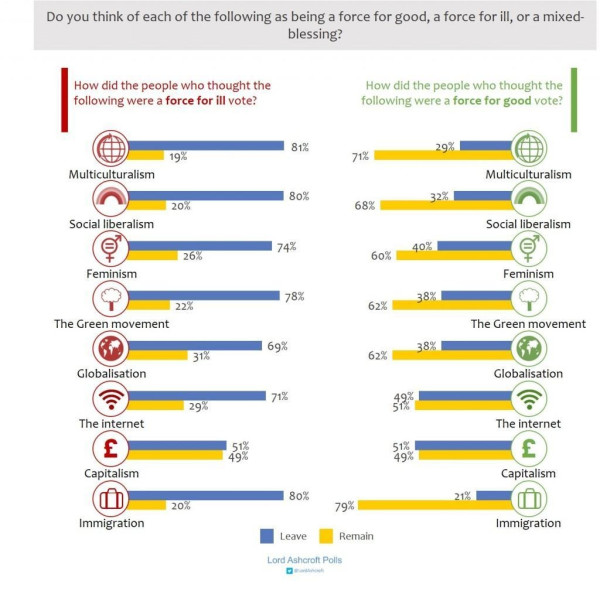 I'm clearly on the Anywhere side of Goodhart's divide (or would be if I were English; since I'm not, I don't count), and it's difficult to read a book that fundamentally accuses me and my friends of being not just wrong on the arguments, but on the ethics of how society should be run. For me, opposition to immigration, multiculturalism, and feminism go beyond mere political disagreement and cross a moral line, one where I'm not terribly interested in understanding the position of the other side. However, I did my best to put those feeling on hold and to assess Goodhart's book as a whole.

There is one section that he gets completely and woefully wrong. This is his analysis of the EU itself, just before the middle of the book, which completely swallows and regurgitates British Eurosceptic propaganda: in short, the euro is a failure which is tearing the EU apart. In the rest of the EU, the fact that the euro survived the 2008 crisis, with more countries queuing to join, is seen as proof of concept; and it is generally recognised that the crises in Greece, Portugal, Ireland, Spain and Cyprus all had rather different and largely indigenous causes and indeed largely different solutions, whereas British mythology has it that the euro and its fictionally one-size-fits-all policies were responsible in each case. I don't think the poor quality of British reporting on this was the crucial factor in the referendum outcome, but it can't have helped.

One the other hand, I have to admit that there was one section that completely convinced me. This was on the awful conequences of the decision two decades ago to reform vocational education by taking it out of the hands of local authorities (1988) and converting all colleges to universities (1992). By removing the vocational educational track, the UK has made it much more difficult for those who aren't up to university level to get meaningful qualifications which will help them in their careers. I was in student politics at the time that this reform was instituted, and remember wondering how we could measure success. The German apprenticeship system is often invoked as an international comparison (though not by Goodhart, who isn't terribly interested in learning from other countries here); in Belgium we also still have polytechnics and vocational colleges, without the temptation to merge them all into sprawling institutions with university status. It is, alas, telling that although Goodhart happily criticises the 1997-2010 Labour governments on numerous occasions, he does not blame the Conservatives for this particular policy screw-up.

Goodhart claims that his motivation for writing the book is to get the Anywheres in leadership (implicitly in the Conservative Party) to wake up, smell the coffee, and strike a new settlement with the Somewheres for the sake of national stability. I think he's wrong; the most important point I get from the book is that the UK has failed on social mobility as well as on social equality, and that those two failures drive the rise of Goodhart’s Somewhere mentality; so perhaps the Anywheres in leadership might do well to shape policies that increase social mobility and decrease social inequality, and see if that increases affection for the state and decreases the resort to populism caused by other political avenues failing to deliver? Of course, that was more or less what Theresa May said she would do when she took office. Well, that doesn't seem to have worked out so far...

Anyway, I’m grateful to my friends for alerting me to this; I did learn some things from it (mainly that it’s not good for my blood pressure to read too much Conservative political analysis). If you want to get it, you can do so here.