There have been a lot of reflective or celebratory comments in the last week about the anniversary of the Good Friday Agreement. It’s an anniversary that I found it quite difficult to write about.

The achievement of the Good Friday Agreement is of course of huge importance. It drew a line under thirty years of political violence, and established the principles by which Northern Ireland can be governed, and the framework of future relations between the United Kingdom and the Irish state. The commemorations rightly called attention to those achievements.

But I hesitated to write too much about it because my own involvement was peripheral; for the first six months of the talks in 1996, I was a staffer for the one of the smaller party negotiaing teams, but then I left Northern Ireland for the international career that has sustained me since then. I actually attended an anniversary event on Tuesday, the day itself, in the European Parliament, organised by Sinn Féin; in fairness, they avoided making it too much of a self-promotion event, and among the others in attendance were MEPs from the Conservative Party and Fine Gael, and a former leading member of the UUP.

I was also thrilled to to attend a dinner with George Mitchell on Thursday night in Oxford. He is 84, but still sharp, witty and humble. I certainly talked to him more on Thursday than I had managed to during the the time in 1996 when our engagement overlapped. 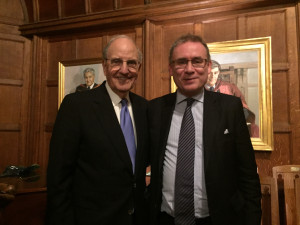 There was one incident from the talks that has stayed with me. Late one evening, I had been left to mind the phones in the office while everyone else was in the petulant negotiating chamber. (You may have forgotten, but the Mitchell talks spent literally the first year talking about process rather than substance, before Sinn Féin joined and the DUP left.) The phone rang, and I answered it; an American voice asked to speak to the party leader. I explained that he was upstairs negotiating.

“This is Tony Lake, the National Security Adviser to President Clinton. Can you give me a general update on what is going on?”

We mythologise the intelligence-gathering capacity of the American system, but sometimes the National Security Adviser is just cold-calling offices in foreign cities to see who answers the phone.

I have two other reasons for hesitation, and it has taken me until the weekend to organise my thoughts properly.

The first, rather more obviously, is that the process is in such a mess. The power-sharing government in Northern Ireland collapsed last year, and London does not seem to be seriously interested in putting the pieces back together. Given how little serious attention London has given to Brexit, it’s in character for the current British government of course, but the added complication is that the Conservatives depend on the DUP for their majority and therefore are not in a position to exert pressure if it were necessary. The Americans, whose presence via George Mitchell was so crucial in 1998, are also now missing in action. So I don’t see any immediate cause for optimism. The gap between the two sides is not huge - certainly much less than in 1998 - but at present the leader seem more interested in mutual recrimination rather than any serious attempt at movement.

The second is much more personal. That morning of 10 April 1997 I was working in Bosnia, but staying closely in touch with my former colleagues back home (my friend Kate Fearon has vividly recounted her party’s experiences of the last day of the talks), and eventually the news came through that the Agreement had in fact been reached.

I called Anne in our apartment and told her. She in turn gave me the momentous news that B, aged nine months and a bit, had successfully fed herself with a spoon. (At least, intent and outcome were both clear, even if there was some spillage.) This of course is relatively early, and otherwise B hit her milestones more or less on schedule; she started walking the week before her first birthday, and was saying a few words not long after. Here she is a bit later in 1998. 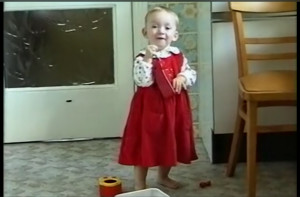 And then she lost most of it, in the second half of 1999 just after her second birthday, and now cannot talk at all. She still has no problem with motor skills, particularly when it comes to food; these pictures were taken on an outing a year ago. 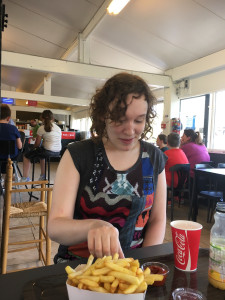 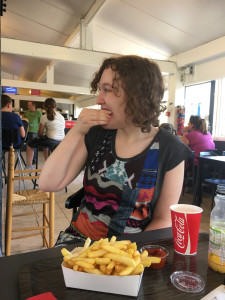 When your child achieves somthing new, even if it’s only eating with a spoon, it’s a pleasant pointer to the future. But sometimes it doesn’t work out that way, and it’s difficult to write about, particularly when anniversaries come around. So I’m writing about the fact that it is difficult to write about, and will have to leave it there.
Collapse