Julian the Apostate is one of those great historical characters who I came to relatively late in life, from Chapters XXII, XXIII and XXIV of Gibbon. I then quite by accident came across Ken Broeders' seven-part graphic biography, and read the first six parts in late 2016. Now it is time to look at Gore Vidal's 1964 novelisation, and incidentally finish off the Broeders version.

"He's dead. The Bishop's dead. In the church. He died. Just like that!"

This helped make its author's reputation back in 1964, with the timely irreverence for Christians ("Galileans") and churches ("charnel-houses") and the depiction of a potential turning point in world history that in the end was not taken. The vibrancy of the fourth-century Roman empire, and the uncertainty of life at the top, are very well depicted, and there is a nice narrative frame of two of Julian's friends providing commentary on his memoirs. It's quite a long book but the story (whose facts don't need a lot of embellishment) holds very well. The one weak point is that Julian's own ideas aren't really expressed particularly well, other than that he hated Christianity; I understand that the real emperor left a much more convincing body of writing. You can get it here.

This was at the top of my list of unread non-genre books. Next on that list was The Bean Trees, which however popped to the top of another list simultaneously. Next after that is Gemini, by Dorothy Dunnett. 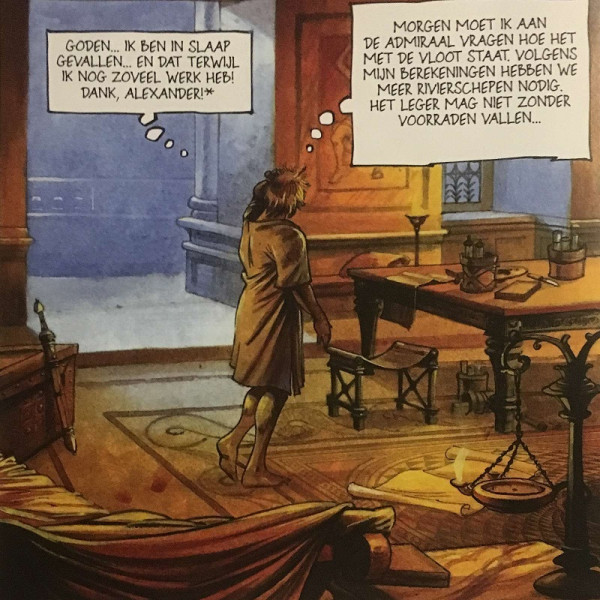 Julian: Ye gods... I fell asleep... and when I still have so much work to do! Thank you, Alexander!*

Tomorrow I must ask the admiral how things are with the fleet. According to my
calculations we still need more river boats. The army mustn't run out of supplies...

*Julian means that Alexander the Great used this method: as soon as he nodded off,
his grip on the ball weakened, and it fell noisily into the dish... and shocked him awake.

This is the climax of the six previous books, with Julian's hubris leading him to the final confrontation in Persia, initial genius in attack thwarted by the failure to maintain supply lines and his eventual death by friendly (or rather, unfriendly) fire. Lots of sex, violence and death, but all done convincingly and coherently. This is one of the classic cases of Flemish/Dutch comics which are crying out for an English translation. My fees are reasonable. You can get it here in the original Dutch.

This was my top non-English language comic. Next on that pile is Rose de Paris, by M. Leroy. 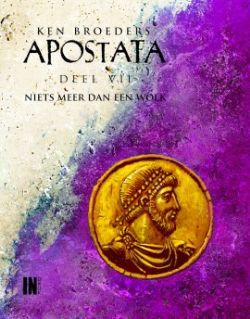