It is almost exactly 21 years since my first trip to Macedonia, back in April 1997, when many things were different. I've been raving about it ever since to anyone who would listen, particularly my long-suffering wife and family. So when we started looking for options for an Easter weekend getaway, Anne suggested that I should take her to my favourite Balkan state. And so I did. F agreed to accompany us as well. This is the three of us by Lake Ohrid at Sveti Naum, with the Albanian mountains behind us.

Ohrid is the old ecclesiastical capital of Macedonia (or indeed Bulgaria). This is the dramatic church of Sveti Jovan Kaneo, on a headland by the lake. We have a painting of it on the wall in our front room at home; Anne gasped in recognition as we came around the corner on a hillside path and saw the real thing. In 1937, Rebecca West "walked on through the town by a track which followed the top of a cliff beside the lake and took us at last to a church standing on a promontory covered with pale-yellow flowers. This I remembered well, for it was the Church of Sveti Yovan, of St. John, where I had learned for the first time the peculiar quality of Eastern Christianity, that is dark and not light, and unkempt as only the lost are in the West."

We were staying in the old town, near the Church of Sveti Sofija, the Holy Wisdom. Of this, Rebecca West wrote: "[It] was built, it is said, at the same time as the Hagia Sophia of Constantinople and was restored by the Nemanyas. It is a glorious building, the size, I should think, of Steeple Ashton parish church, a superb composition of humble, competent brickwork achieving majesty by its sound domes and arches. It is decorated with some magnificent frescoes of the Nemanya age, one showing an angry angel bending over earth in rage against the polluted substance of those who are not angels, and another showing the death of the Virgin, where sorrowing figures drip like rain down the wall behind the horizontal body of a woman who is giving herself without reserve but with astonishment to the experience of pain, knowing it to be necessary. That the building should be now Christian is a victory, since the Turks used it as a mosque for five hundred years. But the church is full of light. It is built according to the Byzantine and not according to the Serbo-Byzantine fashion, and has no iconostasis but only a low barrier to divide the congregation from the priest. A makeshift iconostasis of chintz and paper and laths has been run up, but it is of no avail. Light stands like a priest over all other priests under the vaults that were raised high to cast out shadow. And this church is unbeloved. A fierce old nun keeps it fanatically clean and would give her life to defend it."

I don't know if the lady currently in charge is a nun, but we charmed her sufficiently that she let us off the general prohibition on photography inside the church, and we were able to record some of the frescoes for ourselves. The lighting is not always fantastic, but here is the Divine Wisdom herself, above the altar. Edward Lear, better known for his limericks, visited Ohrid in 1848, almost 90 years before Rebecca West and 170 years before us. I tried to reproduce two of his paintings in their modern setting, but without much success. This is the Ali Pasha Mosque as Edward Lear saw it in 1848: "I drew a fine old Greek church, now turned into a mosque". (Actually he was wrong; it was built as a mosque in 1573.)

The minaret is long gone, the base of the mosque is now concealed by other buildings, and much of the rest by scaffolding: Across the square is an ancient tree which Lear drew: 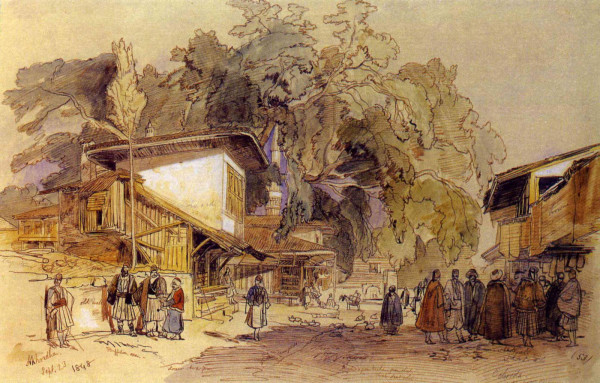 "There is a street scene below the castle, where a majestic plane shades bazaars rich with every sort of gay-coloured raiment. Through its drooping foliage gleams the bright top of a minaret, and below it are grouped every variety of picturesque human beings. To carry away a sketch of this was the work of half the morning".

The plane tree is still there, very close to the Ali Pasha mosque. The minaret in Lear's picture belongs to the Zeynel Abidin Paşa mosque on the other side of the square, and unfortunately a big support structure for the tree now prevents us getting Lear's view. The tree is now best seen from the west. Neither Edward Lear nor Rebecca West was aware of the ancient theatre in Ohrid, now excavated and used for performances: We stayed very economically in the Villa St Sofija hotel, near the church mentioned above. Our rooms were palatial, with no need for the communicating doors that Rebecca West mentions: "Ochrid is a very long way from London. One gets into a train in London at two o'clock in the afternoon and all the next day one crosses Italy or Austria, and on the morning of the second day one is in Belgrade. Even if one stays in the Athens Express one cannot be in Skoplje before five that afternoon. There one must spend the night, and start early in the morning to reach Ochrid in the late afternoon. It is also a fact that not one in a million Englishmen has been to Ochrid. What happened when we arrived at the hotel on Lake Ochrid, therefore, was unfair. We found Gerda talking to a manageress, one of those strange polyglots who seem to have been brought up in some alley where several civilizations put out their ash-cans, since only bits and pieces have come their way, never the real meat. She showed some interest when she heard we were English. An Englishman had come to the hotel only the other day. Did we know Professor So-and-so? Yes, we knew that ornament of the British academic world. He had liked Ochrid trout, all the world liked Ochrid trout, we would like Ochrid trout, but first would we like a risotto of crayfish, such as the Professor had also liked? Yes, we thought we would. And were we really married, or did we want two rooms with a communicating door, like Professor So-and-so and his young secretary? 'My God,' said my husband, with deep emotion, 'if I had a son I would tell him this story several times a year.'"

We moved on to Sveti Naum, the monastic settlement beside the Albanian border, of which Rebecca West wrote at length. She describes the core ancient church thus: "We passed under an arch and were in the small square formed by the monastery buildings. They are a mixed lot, put up at various times since the fourteenth century, which are painted different colours, some white, some grey, some red, for no other reason than that the monks happened to be given these paints. At one point there are no buildings, and a terrace looks down on the wide face of the lake. The air up here is cooled by the breath of the water. In the centre of this square is the tenth-century Church of Sveti Naum. It is dark and low, its stone walls are brown save where they are plastered white, and its two cupolas, one of which is taller than the other, are of red and white brick, very old, very dim in colour; and it is roofed with red-brown tiles. In shape it is like a locomotive. It stands above the cobbles of the square on a platform of earth, walled up with stone. On one side of the church there grows a lilac tree, which bears very large purple flowers, on the other a fig tree. By the fig tree are some poles on which they dry the monastery fishing-nets." The two trees are gone, but the church remains, still shaped like a locomotive: Most notably, the peacocks that she mentions, and which feature in some of the ancient frescoes, still patrol the monastery precincts: Even more remarkably, there are at least two albino birds - a peahen, who evaded my photography, and a white peacock: On the way down to Ohrid, we stopped in Tetovo to visit the famous Decorated Mosque, a beautiful example of Islamic art from the 16th century. Here's a panorama with family members (click to embiggen):

They are (justifiably) proud of the depiction of the Qa'aba, a rare example of that subject in Balkan Islam: The sisters who funded the building of the mosque in 1438 rest outside in a türbe: Finally, we ate really well, and economically, while in Macedonia. When we lived in Bosnia in 1997-98, the standard lunchtime snack was burek, and we tracked down a very tasty sample on a fleeting visit to Kičevo: In summary, I think I convinced my family about Macedonia, and maybe we'll go back for longer next time.
Collapse