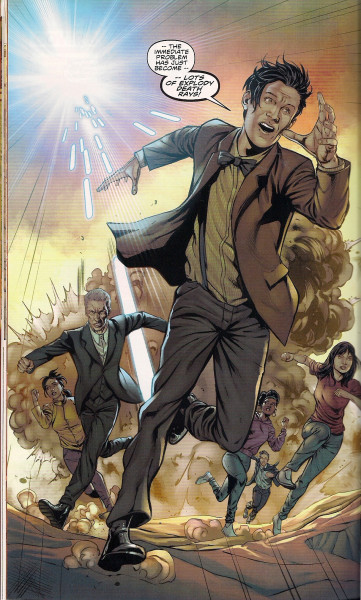 This is a rather lovely production: Doctors Ten, Elevan and Twelve join up with each other and their companions, comics-only Gabby Gonzalez (Ten) and Alice Obiefune (Eleven) with Clara Oswald, in an adventure that starts in a Paris cafe in 1923 and then diverts to Marinus (not the first recent story for me involving the Voord), exploring several alternative futures for each of the three Doctors in the story (each future presenting a different fourth Doctor). We also get cameos from the War Doctor and Ninth Doctor. And rather gloriously the book also includes several shorts, all written by Paul Cornell but with art by Marc Ellerby, Rachael Smith and Neil Torrance, suggesting that the Doctors do other stuff apart from having adventures, like buying comics and open mic comedy. A good adventure in itself which takes what we know about the Doctor(s) and shakes it up a bit. Get it here.