It is said that Nicolaus Copernicus (1473-1543) never saw the planet Mercury in his lifetime, though this seems to be a misunderstanding. Until last week, I had never knowingly seen it either.

Mercury is the closest planet to the Sun, and zips around once in every 88 days. Its orbit is distinctly eccentric - its closest point to the Sun is 0.32 Astronomical Units, its farthest point is 0.48 AU, from less than a third of Earth’s average distance from the Sun to almost half. The orbit is also tilted in such a way that it’s only really well oriented for us mid-Northern hemisphere folks if Mercury happens to appear farthest from the sun to the east in February or March, for evening viewing, and to the west in September or October, for mornings.

Fortunately Mercury reaches greatest eastern elongation next Thursday, 15 March, and if you look due west 30-40 minutes after sunset this coming week, you will see first Venus, bright and lower down, and then Mercury, not quite as bright as Venus but brighter than any star, a little further up and to the right. I used an app to be sure I was looking in the right direction, but really it wasn’t necessary. Catching a plane on Friday night, I had a good view of both planets as they appeared in the twilight, and even managed to take a picture with my phone as I boarded. 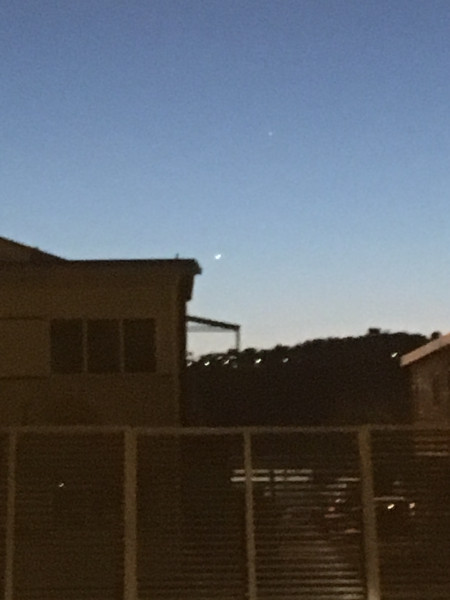 Give it a try. You can find out when the sun sets in your location just by googling “sunset time”; make a note to check the sky half an hour later. Next Sunday evening, 18 March, the new crescent Moon will be very close to both Venus and Mercury. If you haven’t caught it by 20 March, you will have to wait until next time.

Mercury is first noted in the cuneiform MUL.APIN text, which may date from as early as 1370BC, where it is given the name 𒄞𒌓, “the jumping planet”, possibly pronounced Šihṭu. The Babylonians knew that it returned to the same place every 46 years. They identified it with 𒀭𒀝, Nabu, god of literacy, the rational arts, scribes and wisdom, and the association continued to the Greek Hermes and Roman Mercury.

It was thought for a long time that Mercury’s rotation period was as long as its “year”, so that it always presented the same face to the Sun, as the Moon does to the Earth. In fact (as discovered by Pettengill and Dyce of the Arecibo Observatory in 1965) it rotates on its axis in 59 days, two-thirds of its “year”, which means that the time from sunrise to sunrise is 176 days, two “years”. At perihelion, when Mercury is closest to the Sun, the orbital rotation is faster than the axial spin, and the Sun appears to go backwards in the sky.

Transits of Mercury, where as seen from Earth the planet appears to cross the face of the Sun, have been important in scientific history. Johannes Kepler predicted that there would be one in 1631; he was dead by then, but Pierre Gassendi confirmed the prediction. Captain James Cook sailed to New Zealand in 1769 to observe a transit. The shift in precise timings over the centuries enabled Einstein to test general relativity on the precession of Mercury’s perihelion. (NB that by definition, transits of Mercury cannot be observed at night.)

Mercury has been the subject of speculation since people have been speculating. The SF Encyclopedia and Wikipedia both list fiction set there. Looking through my archives, I find Robert Silverberg, W.D. Flackes, Kim Stanley Robinson and Isaac Asimov all visiting. As I have written before, the old idea of Mercury’s rotation was more attractive to writers. There is only one Doctor Who story set on Mercury, the rather obscure 2011 Tenth Doctor comic “Hot Stuff” from the Doctor Who Adventures magazine by Trevor Baxendale with art by John Ross and colours by Alan Craddock. 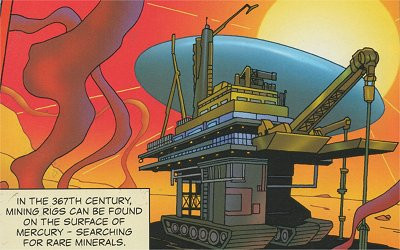 Readers of a certain age will recall that Miss Griffin of the Nigel Kneale series Kinvig claimed to come from the planet Mercury. 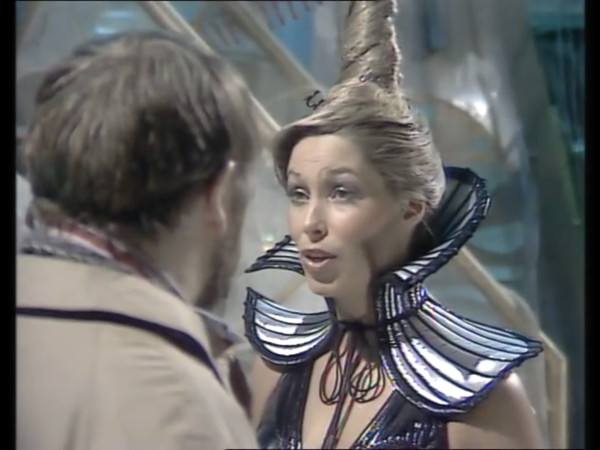 Here is Kurt Vonnegut’s imagining of Mercury, from The Sirens of Titan.

The planet Mercury sings like a crystal goblet.
It sings all the time.
One side of Mercury faces the Sun.
That side has always faced the Sun. That side is a sea of white-hot dust.
The other side faces the nothingness of space eternal. That side has always faced the nothingness of space eternal. That side is a forest of giant blue-white crystals, aching cold.
It is the tension between the hot hemisphere of day-without-end and the cold hemisphere of night-without-end that makes Mercury sing.
Mercury has no atmosphere, so the song it sings is for the sense of touch.
The song is a slow one. Mercury will hold a single note in the song for as long as an Earthling millennium. There are those who think that the song was quick, wild, and brilliant once – excruciatingly various. Possibly so.
There are creatures in the deep caves of Mercury.
The song their planet sings is important to them, for the creatures are nourished by vibrations. They feed on mechanical energy.
The creatures cling to the singing walls of their caves.
In that way, they eat the song of Mercury.
The caves of Mercury are cozily warm in their depths.
The walls of the caves in their depths are phosphorescent. They give off a jonquil-yellow light.
The creatures in the caves are translucent. When they cling to the walls, light from the phosphorescent walls comes right through them. The yellow light from the walls, however, is turned, when passed through the bodies of the creatures, to a vivid aquamarine.
Nature is a wonderful thing.
The creatures in the caves look very much like small and spineless kites. They are diamond-shaped, a foot high and eight inches wide when fully mature.
They have no more thickness than the skin of a toy balloon.
Each creature has four feeble suction cups – one at each of its corners. These cups enable it to creep, something like a measuring worm, and to cling, and to feel out the places where the song of Mercury is best.
Having found a place that promises a good meal, the creatures lay themselves against the wall like wet wallpaper.
There is no need for a circulatory system in the creatures. They are so thin that life-giving vibrations can make all their cells tingle without intermediaries.
The creatures do not excrete.
The creatures reproduce by flaking. The young, when shed by a parent, are indistinguishable from dandruff.
There is only one sex.
Every creature simply sheds flakes of his own kind, and his own kind is like everybody else’s kind.
There is no childhood as such. Flakes begin flaking three Earthling hours after they themselves have been shed.
They do not reach maturity, then deteriorate and die. They reach maturity and stay in full bloom, so to speak, for as long as Mercury cares to sing.
There is no way in which one creature can harm another, and no motive for one’s harming another.
Hunger, envy, ambition, fear, indignation, religion, and sexual lust are irrelevant and unknown.
The creatures have only one sense: touch.
They have weak powers of telepathy. The messages they are capable of transmitting and receiving are almost as monotonous as the song of Mercury. They have only two possible messages. The first is an automatic response to the second, and the second is an automatic response to the first.
The first is, ”Here I am, here I am, here I am.”
The second is, ”So glad you are, so glad you are, so glad you are”
There is one last characteristic of the creatures that has not been explained on utilitarian grounds: the creatures seem to like to arrange themselves in striking patterns on the phosphorescent walls.
Though blind and indifferent to anyone’s watching, they often arrange themselves so as to present a regular and dazzling pattern of jonquil-yellow and vivid aquamarine diamonds. The yellow comes from the bare cave walls. The aquamarine is the light of the walls filtered through the bodies of the creatures.
Because of their love for music and their willingness to deploy themselves in the service of beauty, the creatures are given a lovely name by Earthlings.
They are called harmoniums.

No chapter divisions, so here is the third paragraph:

From Pliny’s statement it would appear that it was long before regularly educated physicians obtained a footing in Rome(b). The practice of medicine was, probably, for 600 years in the hands of quacks and casual practitioners. This was partly owing to the simple and active life led by the Romans. “ A science, the offspring of luxury and of depravity, with difficulty found access to a nation, all whose members, from the chiefs to the lowest in the state, were warriors, enured to fatigue, or hardy cultivators of the soil.”(a) “ But as the relations of the Romans with the Greeks became multiplied, and as luxury progressed among the former, physicians were seen to establish themselves in the capital of the world(b). The Greek physicians who first settled there were, for the most part, proprietors of baths ; and many of these adventurers were slaves whom their masters, incapable at first of appreciating the advantages of science, and afterwards enervated by the luxury of the Greeks, sold or set free, after having presented them with considerable gifts in return for benefits received from them. These freedmen established shops, which the Romans called medicinæ, in which they sold medicines and profitably exercised their talents. But other physicians, who came to Rome under more favourable circumstances, enjoyed advantages and privileges which an art so noble as medicine is entitled to exact from all civilized nations ; and when the Romans expelled the Greeks from Italy, the law which banished them excepted by name those who followed the profession of medicine.”(c)

Insomnia reading a week or so ago, with some relevance to my 16th-century interests - the Dublin Guild of Barber-Surgeons was established in 1576, as part of the drive for professionalisation and regulation of medical services. A lot of the wider context of the history of medicine is also given, at least as far as it was understood in 1848 when the book was written. You can read it here.
Collapse