Over on Slugger, David McCann reminds us that the most recent Northern Ireland Assembly election was exactly a year ago today. I hadn't realised that the election broadcasts are almost all online, both for the 2 March Assembly election and the 8 June Westminster election. Here I am!


I can't find the second half of the Westminster coverage, but my memory is that I was on again only once, briefly, at the very end.

These six audios were released in 2012 and 2013, and I actually bought and listened to them then, but did not get around to writing them up in the press of Worldcon and other business. My revisiting The Talons of Weng-Chiang prompted me to go back to these as well. Unusually for the Jago and Litefoot narrative, they all take place outside Victorian London - the first two pretty far away in both space and time.

Voyage to Venus, by Jonathan Morris, takes the two Victorian adventurers and the Sixth Doctor, who turned up at the end of the previous series, to, well, Venus, in a far future where men are withered brainless parasites and women rule; but the non-human natives are restless, planetary disaster threatens, and there is tons of palace intrigue and overseen by guest star Juliet Aubrey as the Empress. Benjamin, Baxter and Baker are all on top form, the script pays homage to the Victorian planetary romances (rather more than to C.S. Lewis), and there are some very entertaining bits of fan service that are not at all intrusive.

Voyage to the New World, by Matthew Sweet, did not delight me as much. Our heroes arrive on the island of Roanoke in 1590, and are caught up immediately in the mystery of the lost colony; I got almost as lost as the colony in trying to follow the plot, which seemed to have ghostly possessed children, parallel timelines and a 500-year jump back in time for reasons I could not follow. I remember thinking this the first time round as well, which was partly why I did not rush to write it up back in 2012. Most other reviewers seem to have liked it more than I did. At the end, the Doctor returns Jago and Litefoot to London - but to the wrong decade of the wrong century.

Now our heroes are making a go of it in the 1960s; Lisa Bowerman both directs and returns as pub landlady Ellie Higson, who became immortal in an accident earlier in the continuity, Litefoot is managing an antiquarian bookshop, and Jago has landed a gig as the presenter of a nostalgic TV show, which is in itself a very entertaining concept. The theme music is reworked to give it a Sixties feel. Duncan Wisbey returns as Sacker, a policeman descendant of a character from Season 2, and Jamie Newall is entertaining as Jago's long-suffering producer. Best of all, we have Racquel Cassidy (of The Rebel Flesh/The Almost People) as Guinevere Godiva, one of the performers on Jago's show whose interest in theatrical history is more than theoretical.

The first story is The Age of Revolution, by Jonathan Morris. The plot is fairly obvious - another very annoying TV presenter, played by ben Willbond, is rather more dangerous than he first seems - but that doesn't matter, the scenery is excellent. See here for deleted scenes from the script. 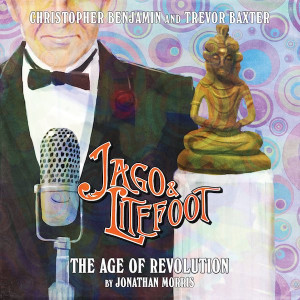 The Case of the Gluttonous Guru, by Marc Platt, doesn't quite hit the mark in the same way. Chook Sibtain (who was in both The Waters of Mars and the excellent Sarah Jane story Warriors of Kudlak) carries off a tricky turn as the titular guru rather well, but the plot depends on a certain amount of body horror that doesn't work all that well with these characters in this setting. 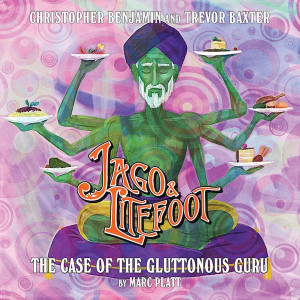 In The Bloodchild Codex, by Colin Brake, Ken Bones (the General in The Day of the Doctor and Hell Bent) turns up as a sinister savant in search of an old book. I didn't think it was particularly original, but everyone has fun chewing the carpet. 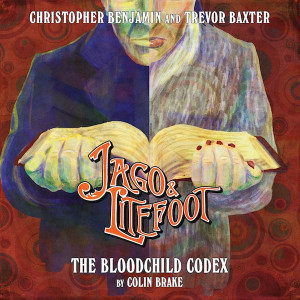 And we end our excursion to the Swinging Sixties with The Final Act, by Justin Richards, which basically returns to The Talons of Weng-Chiang and serves up a rather glorious sequel, much the same story but set seventy years later with Raquel Cassidy in the Li H'sen Chang role. There is a silent appearance from Mr Sin - it's difficult to write a mute character into an audio but Richards does it. Given the premise of the story, our heroes' means of return to the nineteenth century is no supririse, but the journey to get them there is great fun. 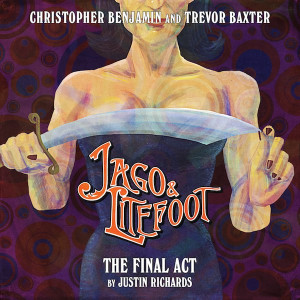 The most memorable quote of the series:

Jago: 'But apart from the cinema, less poverty, the National Health Service, women's suffrage, comprehensive education, aviation, heart transplants, and a man on the moon, what else does this decade have going for it?'
Litefoot: 'Mini-skirts?'
Jago: 'Alright, alright, you may have a point!'