She [Scarlett’s mother, Ellen O’Hara] would have been a strikingly beautiful woman had there been any glow in her eyes, any responsive warmth in her smile or any spontaneity in her voice that fell with gentle melody on the ears of her family and her servants. She spoke in the soft slurring voice of the coastal Georgian, liquid of vowels, kind to consonants and with the barest trace of French accent. It was a voice never raised in command to a servant or reproof to a child but a voice that was obeyed instantly at Tara, where her husband’s blustering and roaring were quietly disregarded.

Having watched the film, it took me ages to get through the book, which at 1056 pages is the longest I have read since A Suitable Boy. I can see why it was such a best-seller in its day (it tops the Publisher's Weekly lists for both 1936 and 1937, and won the Pulitzer Prize); it's a great story of a strong woman in adverse times, which is both very feminist and also thoroughly racist.

Although it's so long, it wears its length much better than the film. The second half in particular, once the war is over, gels much more effectively plot-wise, with Scarlett becoming tougher and tougher to the point where she steals her sister's lover, uses forced labour in her mills, and puts profit above reputation by cultivating the occupiers of Atlanta. The O'Hara family background is given more detail, explaining the oddity of an Irish Catholic immigrant who is also a slaveholder (he won the land in a poker game). There is a lot more about the politics of the time (while making clear Scarlett's own rather limited interest in that side of things). The film jumps between the high points of the second half of the story (skipping only the scene where Tara is raided by Union troops, which perhaps was a bit much for general distribution); it might have been better to concentrate more on a smaller number of plot strands. A couple of really interesting characters in the book are omitted from the film, notably Will Benteen, the Confederate veteran who ends up managing Tara and marrying Scarlett's sister Suellen.

The book's treatment of race and slavery is much worse than the film's. Slavery was a good system, especially for the house slaves, and the field hands were too stupid to deserve anything better. Silly Northerners take Uncle Tom's cabin seriously. The Ku Klux Klan are heroic gentlemen who act only to restore order when the Northern occupiers fail (and Scarlett's carelessness is anyway responsible for them killing people). The end of slavery means a nastier and less civilised society (as personified in Scarlett's journey from Southern belle to hard-nosed entrepreneur); the old days are gone with the wind. 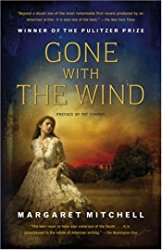 I was a bit surprised the other day to discover someone who describes himself as "The Leading Hispanic Voice in Science Fiction". How could that possibly be quantified, I wondered? It is probably not too difficult to be *A* Leading Voice of whatever kind one might want to be. But *The* Leading Voice surely requires some numerical evidence.

Of course, there is some numerical evidence available from my old favourites, Goodreads and LibraryThing. I had to stay up late this evening, and plugged a list of leading Hispanic sf writers into both systems. I populated my list from Wikipedia and from those listed on web pages which appeared reasonably high up the Google rankings for "Hispanic science fiction writers". I ended up with 27 writers on my list, but took three of them off (Giannina Braschi, Junot Diaz and Sandra Cisneros) because it wasn't clear to me that they are writing sff, and I could not tell which book or books should qualify for my analysis. I couldn't find any books to measure for the other four, Tom Greene, Richie Narvaez, Alejandra Sanchez and Alberto Yañez; I guess that they have been publishing short fiction (or that I simply missed the listings for their books).

It may well be that of the remaining twenty, some are not really sf writers or indeed some may not identify as Hispanic; my apologies to any who think that they do not belong on this list. (Silvia Moreno-García may well be a case in point; she describes herself as "Mexican by birth, Canadian by inclination".) It is certain that I have omitted writers who definitely are Hispanic science fiction writers with solid books to their credit; again, my apologies.

Anyway, here are the results, ranked (as is my usual habit) by the geometrical average of the number of owners of the top book by that author on both systems. In most cases the same book was top on both systems for each author. In a few cases lower down the table, different books topped the author's list on Goodreads and LibraryThing, so I took the one with the highest geometrical average of the number of owners.

In one case, an author's top book on Goodreads scores decently enough in the bottom quarter of the Goodreads table; but not a single LibraryThing user appears to have acquired any of his books. So he is listed at the very end.

There is a very big jump between the top seven (all over 4600 on Goodreads and over 190 on LibraryThing) and the lower thirteen (all below 2200 on Goodreads and under 130 on LibraryThing). I think it would be fair for any of the twenty listed below to describe themselves as "a" leading Hispanic voice in science fiction; Carmen María Machado, Daniel José Older, Ana Castillo, Malka Older, Manuel Gonzales, Silvia Moreno-Garcia and William Alexander would be on particularly solid ground if they made such a claim.


I confess that I have not read any of these as far as I can remember (though I have read short fiction by several); will try and fix that in the course of this year.

Edited again to add: Ann Aguirre apparently doesn't count, but Bronze Gods co-authored with her husband Andres, has 9,768 owners on Goodreads and 225 on LibraryThing, which would put him firmly in the upper third of the table.

Edited once more to add: For some reason I had missed Michael J. Martinez, whose The Daedalus Incident has 3,654 owners on Goodreads and 135 on LibraryThing. That puts him towards the lower end of the top half of the table.

Edited yet again to add: A. Lee Martinez writes both sf and humorous fantasy. His Gil's All Fright Diner has a very respectable 17,277 owners on Goodreads and a massive 1,095 on LibraryThing.
Collapse