The young man shook his head impatiently. "Not 'Doctor,' please. Around here that means either an M.D. or a psychiatrist. I'm neither; just a research psychologist." Ed Benedict picked up the ball and examined it closely. Young, thin, obviously intent, he gave McEvoy none of the impression of eager, inexperienced blundering he so often felt with the young mathematicians and physicists coming into his laboratory from their training. So often they thought they had the world by the tail, knew all there was to know and had only to convince everyone else of that simple fact. By contrast, Ed Benedict had a curious manner of reserve about him that McEvoy couldn't quite pin down. Not exactly caution; certainly not hesitation, nor fear — maybe wisdom was the right word. A young man, but with a wisdom beyond his years—a wisdom born of experience.

This was the first novel by the mid-twentieth century sf writer Alan E. Nourse, published in two parts in 1951, the year he turned 23. I must admit that I was pretty impressed. It's a story in two halves, set twenty years apart, in the near future (of 1951), about the effects of a machine that enables access to parallel dimensions in which things lurk which may or may not be hostile to humanity. Where a lot of writers of this era would make McEvoy the heroic inventor of the machine, Nourse instead shows him as so narrowly focussed as to miss the dangers he has unleashed, and instead the heroes are the two people who are able to travel between the dimensions unharmed - the teenage Gail in the first half, and her young son Robert in the second half. I won't pretend it's great literature, but the conceptualisation of what might lurk in the other dimensions and what they might think of us was very original, and although the setup did not go much more than 100 miles from New York, it was well enough realised. You can get it here.

This was the sf book that had lingered longest on my shelves, and also the shortest unread book of those I acquired in 2010. Next on those lists respectively are Spirit by Gwyneth Jones, and No Going Back to Moldova by Anna Robertson. 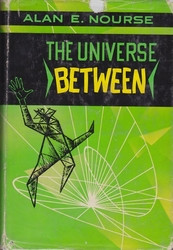