Second frame with dialogue of third chapter (for context, Moses has didactically asked the Israelites what it is that he does not want to see when he gets back from answering God’s phone call; this particular story is by Alan Moore and Hunt Emerson, adapted from Leviticus 20): 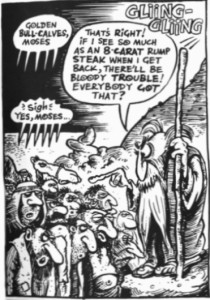 Thirty years ago, in 1987, Knockabout Comics produced this adaptation of fourteen Old Testament stories by leading comics artists; I got it as part of the Neil Gaiman Humble Bundle a few years back, he being the author of six of the fourteen stories (including Jael and Sisera as illustrated by Julie “Jewelz” Hollings, the only woman artist in the mix, who also illustrates an adaptation of Ecclesiasticus 42:9-11 by Knockabout publisher Carol Bennett).

There are some truly grim and nasty stories in the Old Testament, and while it would be very easy to just point and laugh, the art and stories here are from creators at the top of their game, taking the Bible at its word and confronting us with what is actually in scripture. It was still a bit subversive in 1987 - Knockabout were being regularly harassed by UK authorities for importing subversive comics from the USA, and Outrageous Tales from the Old Testament narrowly avoided legal action in Sweden. We are being challenged to think about why some forms of expression should be allowed if they are labelled as Scripture, and not otherwise. It’s a debate that has of course moved on to non-Christian religions too since 1987.

My favourite of these is the last one, adapted by Brian Bolland (who for some reason does not get a cover credit) from 2 Kings 2:23-25. It portrays graphic violence, so I’ll just link from the text:

23 Elisha left Jericho to go to Bethel, and on the way some boys came out of a town and made fun of him. "Get out of here, baldy!" they shouted.
24 Elisha turned around, glared at them, and cursed them in the name of the Lord. Then two she-bears came out of the woods and tore forty-two of the boys to pieces.
25 Elisha went on to Mount Carmel and later returned to Samaria.

With a big grin.