Two hours had passed since Ledesme had nearly met his death in the jaws of the kymera. Night had fallen, ushering its own distinctive chorus of nocturnal performers onto the stage of ruins surrounding the expedition’s camp.

This was a slightly unusual acquisition at Loncon 3 - the author was staying in the same hotel as us, the Prince Regent on Prince Regent Lane, and we got to know each other over breakfast. The book itself is a decent enough tale of elite family politics and slightly steampunk technology in a world which resemble, but is not quite the same as, a heavily Hispanic Southern California. All very richly imagined.

This was the top book on my to-read list by a non-white author; next is Jade City by Fonda Lee. 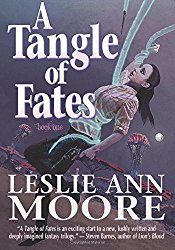