You Can't Take It With You won the Academy Award for Outstanding Production of 1938; there were nine other nominees, but the only one I was aware of was the Pygmalion with Leslie Howard and Wendy Hiller. It got nominations in six other categories, Frank Capra winning for Best Director.

The only film from the same year that I can remember having seen before is The Lady Vanishes, which I hunted down long ago because supporting characters Charters and Caldicott briefly got their own TV series in the 1980s. IMDB's two ratings systems rank different Cary Grant / Katherine Hepburn films as top of the year, Holiday and Bringing Up Baby.

Like It Happened One Night, which won four years earlier, it's a screwball comedy directed by Frank Capra and scripted by Robert Riskin, in which a rich kid falls in love with someone deemed unsuitable by the rich parents. This time round, the rich kid is a boy rather than a girl, the audience's sympathies are with his lover's family, and the setting is fairly static, entirely in New York and mainly in the Vanderhofs' zany household. (Several of the actors, notably Jean Arthur, James Stewart and Edward Arnold, were reunited the next year for Capra's Mr Smith Goes To Washington.) Like Cavalcade, which won five years earlier, it is adapted from a stage play of the same name; the adaptation is a lot more substantial here, though the crucial film set of the Vanderhofs' front room remains very stage-like.

I cannot find any useful trailers online. There are three scenes on Youtube, of which only this one, the confrontation between Grandpa Vanderhof (Lionel Barrymore) and the one-scene character Mr Henderson from the IRS (Charles Lane), is really representative (also lifted fairly closely from the original play):


The only really unsuccessful part of the film is the extended first scene between the key love interests, Tony (James Stewart) and Alice (Jean Arthur); she is his secretary and they are in lurve, but there's a mild undercurrent of coercion to the seduction. Tony deliberately invites his parents to meet Alice's family on the wrong day, causing immense embarrassment (and farce). There's also an unnecessarily excruciating scene in a posh restaurant (followed by a nice one with musical kids in a park). Tony's behaviour towards Alice would not pass muster today. 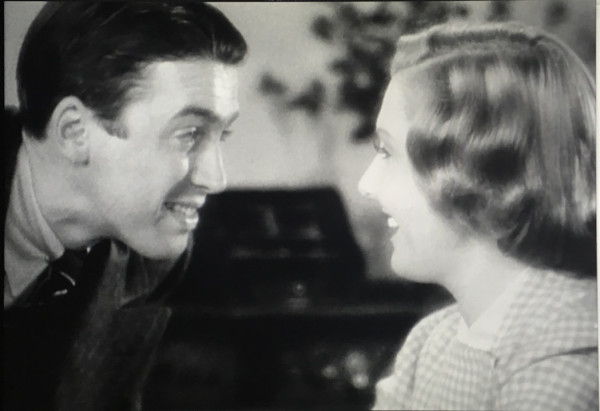 There's a somewhat mixed picture on disability as well. Grandpa Vanderhof spends the entire film on crutches, in the script due to having broken his ankle sliding down the bannister, in reality because Lionel Barrymore was losing the use of his legs due to arthritis and had suffered a hip injury on top; I think this is the first time we've seen a visible disability in a lead role in an Oscar-winning film. On the other hand, he callously makes fun of the estate broker Blakely's facial tic. 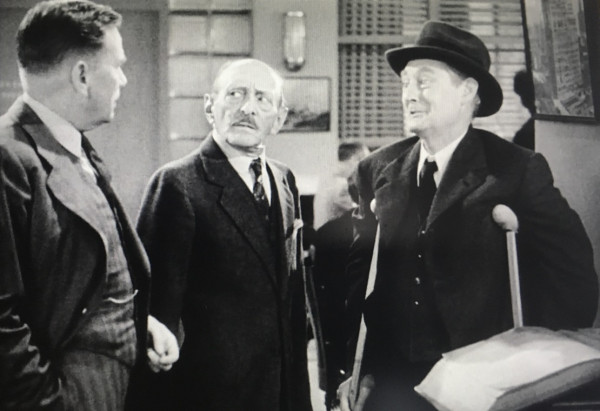 For the first time in an Oscar-winning film, we have African-Americans in serious speaking parts. (Cimarron had a comic black boy, Mutiny on the Bounty had Pacific Islanders and a Hispanic actor playing a Pacific Islander.) Rheba (the Vanderhofs' maid) and her boyfriend Donald are specified as black in the oniginal theatre script, and in the film are portrayed by Lilian Yarbo and Eddie Anderson. They are somewhat comic parts, but no more so than the white actors. Yarbo is particularly good; it seems that this was the peak of her career. The point is made that the posh Kirbys are uncomfortable with the casual relationship the Vanderhofs enjoy with the servants. However, Rheba and Donald are not invited to join family meals as far as we can see. 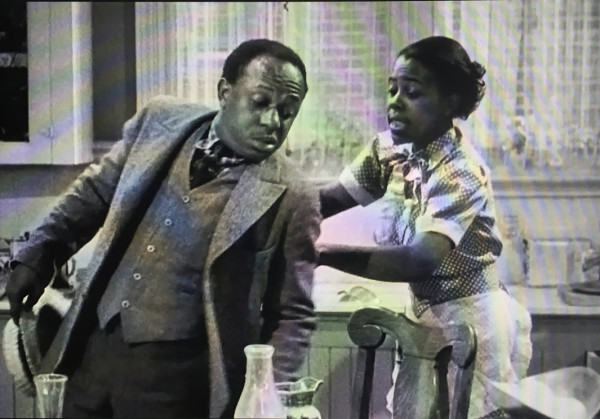 Alice's sister Essie, whose dancing is a constant part of the scenery, is played by Ann Miller in one of her first screen roles, demonstrating the talent that would make her so famous as a dancer in the decades to come. She was only fifteen when the film was made, and apparently found the constant dancing physically very exhausting; the scenes with her and her xylophone-playing husband Ed (played by Dub Taylor) are appropriately chaste. 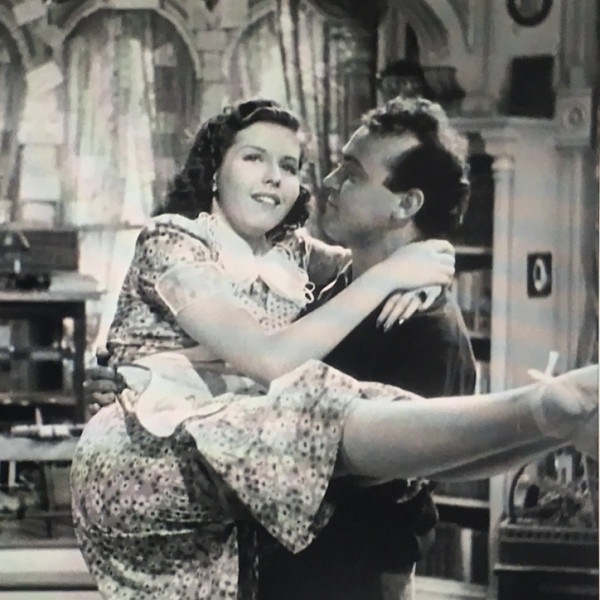 This is the first time I've had cause to comment on the animals in an Oscar-winning film. There are two notable performances. Jimmy the crow went on to appear in all of Frank Capra's future films, including It's A Wonderful Life. This was his first film appearance; he also appears in The Wizard of Oz as the crow which lands on the Scarecrow. He is impressively unflappable and even runs errands for the firework makers in the basement. But I also have to give a shout to the very patient kitten who is used by Essie and Alice's mother Penny as a paperweight for her (unperformed) theatre scripts. (Slightly puzzled that Spring Byington, as Penny, got the only acting Oscar nomination for the film.) 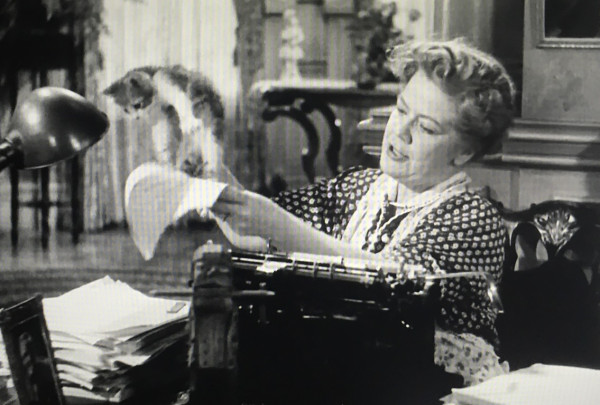 Having expressed my dissatisfaction with the romantic leads, I think the older male leads knock it out of the park. Edward Arnold, who I don't think I'd heard of before, plays Tony's father, Anthony Kirby senior, with much the strongest character arc of the plot, a grasping capitalist who manages to find his soul after a night in prison and the gift of a harmonica. Lionel Barrymore, who we last saw six years ago as the dying accountant Kringelein in Grand Hotel, plays a completely different character here in Grandpa Vanderhof, the patriarch of a chaotic household who brings redemption to all. The climax of the film is when they bond by playing the harmonica, the young lovers' reconciliation being rather a distraction. (NB that Lionel Barrymore plays the grandfather of Jean Arthur's character, though in fact he was only 22 years older than her.) 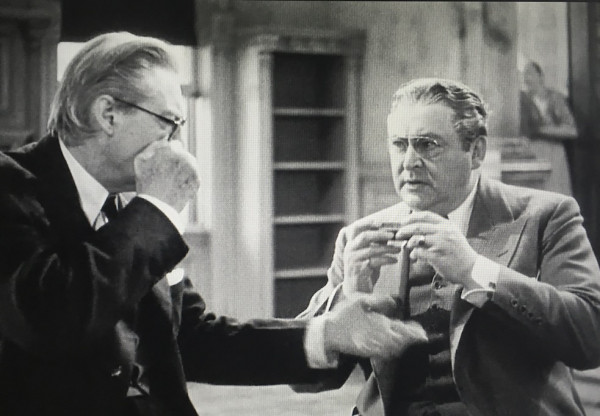 In general, the charming chaos of the Vanderhof household is tremendously attractive, with Essie's dancing, her husband Ed's vibraphone, Mischa Auer as the Russian dancing teacher Kolenkhov ("It STINKS!"), Penny the budding playwright, Samuel S. Hinds as Penny's husband Paul, Halliwell Hobbes as Mr DePinna who arrived as the iceman and moved into the basement to make fireworks with Paul, Rheba and Donald. (It turns out that Grandpa has been earning enough money on the side by appraising stamp collections to keep the taxman happy.) The comic punchlines of the fireworks explosion, the drunk tank and the court room are beautifully set up. The fireworks in particular must have been technically very challenging. 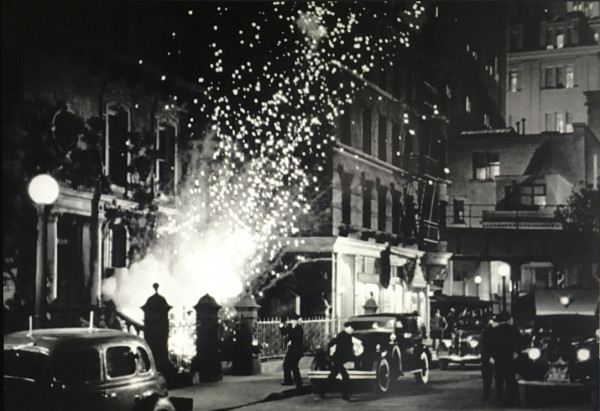 This is the best discovery among the Oscar winners that I have yet made. I had literally never heard of this film before a few weeks ago. It was surprisingly difficult to track down (which is my excuse for the poor quality of the screenshots above). I guess somehow it didn't become one of the popular multiple repeat movies of the television era. True, there is no standout gutwrenchingly strong performance, and perhaps no single particularly memorable line, but there are many better-known films of which this is also true. Well worth hunting down. I really enjoyed it, and watched it a second time with Anne and F.

Incidentally, on the Vanderhofs' mantelpiece there is a photograph of Chekov.

Next up in this sequence is Gone With the Wind, which I have never seen.

As for the play on which the movie was based, here's the opening of the third scene (actually Act II):

GAY. All right, I said to him, you can take your old job . . . (She drinks.)
PENNY. I'm ready to read you the new play, Miss Wellington, any time you are.
GAY. (Pours.) Just a minute, dearie. just a minute. (Drinks again.)
(ED preoccupied with type stick.)
PENNY. The only thing is—I hope you won't mind my mentioning this, but—you don't drink when you're acting, do you, Miss Wellington ? I'm just asking, of course.
GAY. (Crossing to PENNY.) I'm glad you brought it up. Once a play opens, I never touch a drop. Minute I enter a stage door, the bottle gets put away until intermission.

The drunk actress Gay Wellington (and another comic turn, the Grand Duchess Olga) were among the cuts made by Riskin as he adapted the play for the screen. Kirby's background is much less developed in the play - the whole subplot involving property transactions, and the character of Mr Poppins, are inserted by Riskin into the film. The Vanderhofs have pet snakes rather than a raven. (Though I'm glad to say that the kitten is original.)

The guts of it are all the same, and one can see why the play won a Pulitzer as an uplifting tonic in depressing times. It's a bit more misogynistic (as I said, two extra female characters who are only there as figures of fun, and Mrs Kirby gets a harder time) and more racist (Donald gets treated worse). There is a hilarious sequence during the Kirbys' disastrous visit to the Vanderhof household, where Penny gets the Kirbys to play a word association game:

KIRBY. Will you go on, Mrs. Sycamore? What was the next word?
PENNY. (Reluctantly.) Honeymoon.
KIRBY. Oh, yes. And what was Mrs. Kirby's answer ?
PENNY. Ah—"Honeymoon—dull."
KIRBY. (Murderously calm.) Did you say—dull?
MRS. KIRBY. What I meant, Anthony, was that Hot Springs was not very gay that season. All those old people sitting on the porch all afternoon, and—nothing to do at night. (Realizes she has gone too far.)
KIRBY. That was not your reaction at the time, as I recall it.
TONY. (Crosses in a step.) Father, this is only a game.
KIRBY. A very illuminating game. Go on, Mrs. Sycamore!
PENNY. (Brightly, having taken a look ahead.) This one's all right, Mr. Kirby. "Sex—Wall Street."
KIRBY. Wall Street? What do you mean by that, Miriam?
MRS. KIRBY. (Nervously.) I don't know what I meant, Anthony. Nothing.
KIRBY. But you most have meant something, Miriam, or you wouldn't have put it down.
MRS. KIRBY. It was just the first thing that came into my head, that's all.
KIRBY. But what does it mean ? Sex—Wall Street.
MRS. KIRBY. (Annoyed.) Oh, I don't know what it means, Anthony. It's just that you're always talking about Wall Street, even when (She catches herself.) I don't know what I meant.. . . Would you mind terribly, Alice, if we didn't stay for dinner? (Rises. GRANDPA and KOLENKHOV rise. Also ESSIE, ED and PAUL.) I'm afraid this game has given me a headache.

I can see how what plays well on Broadway might not always survive to Hollywood. This was difficult to get hold of, but worth it.