Full marks to David Young of the Press Association, who achieved a major scoop by screenshotting a test graphic from the Boundary Commission's website which apparently reveals the new Northern Ireland constituencies.

BREAKING - Belfast set to retain 4 electoral constituencies as part of major revisions to proposals to redraw boundaries in NI, according to a Boundary Commission map obtained by @PA - new map radically different to politically contentious 2016 plan to cut seats from 18 to 17. pic.twitter.com/CxzVCYjeKH

Unfortunately I am travelling today, so my response is not as detailed as I would have liked. But here it is.

If these are the Commission's revised proposals, they are a huge change from the original map (which I commented on here and here). Belfast retains four seats, and the southern and western constituencies remain almost unchanged. It looks as if Fermanagh/South Tyrone, Foyle, Upper Bann, Newry and Armagh, and South Down all survive with minimal alteration; and some reasonable corrections and additions of neighbouring territory allow West Tyrone, Mid Ulster, East Antrim, North Down and the four Belfast seats to continue. So for 13 of the current 18 seats (17 in future) the proposed changes are relatively mild - certainly much less radical than the Commission had originally proposed.

The five remaining seats - East Londonderry, North Antrim, South Antrim, Lagan Valley and Strangford - must get cut down to four, and the surgery here is pretty brutal. East Londonderry loses its southern edge and gets merged with Ballymoney and the Glens to form a new Causeway seat. North Antrim, having had its top lopped off, gains several wards from South Antrim to become Mid Antrim. South Antrim also loses Ballyclare to East Antrim and Glengormley, including Mallusk, to North Belfast; in compensation it gains Lisburn from Lagan Valley. Strangford loses the Ards Peninsula to North Down, and also Moneyreagh and Carryduff East to South Belfast. The remainder is merged with what's left of Lagan Valley, plus Loughbrickland from Upper Bann, to create a Mid Down seat stretching from Dundonald to Scarva.

It looks as if the Boundary Commission has changed tack, and decided to keep existing constituencies intact as far as possible, rather than grouping by geographic proximity or local government district. If my arguments helped them to come to this conclusion I am happy.

I note some complaints that this is a DUP stitch-up. There is not much evidence for that. To start with, compare the above map from the Press Association with this map of the DUP's own proposals, which a kind friend sent me back in September. 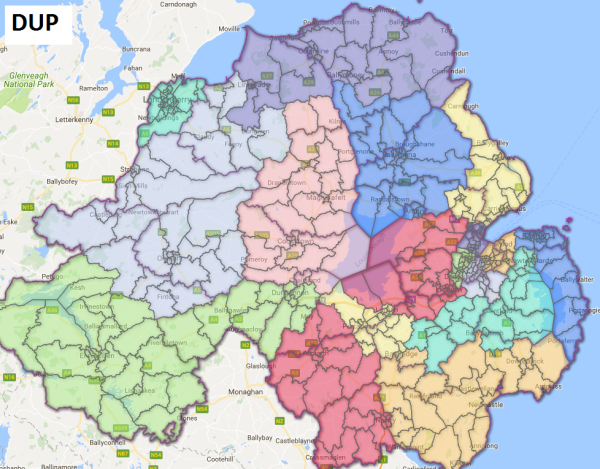 You will note some significant differences, particularly around the five/six constituencies which will be most affected by the proposals. It should also be noted that the idea of keeping Belfast at four seats was supported from the beginning not only by the DUP but also by the SDLP and subsequently by me. Once you have a map that keeps those four seats, there are limited options, especially if you want to retain southern and western seats more or less as they are.

The electoral impact is fairly clear. Sinn Fein remain in the strongest position in all seven seats that they won in 2017. The four new seats, Causeway, Mid Antrim, South Antrim and Mid Down, are strongly DUP seats on recent results, as were the five seats that they replace. The DUP's defence of its three Belfast seats is probably helped a little, but only a little; likewise East Antrim and to a lesser extent Upper Bann. North Down, should Lady Hermon decide to contest it again, could be interesting. The Ards Peninsula may or may not supply enough DUP votes to make up the difference between their candidate and the incumbent Lady Hermon in North Down; but if she does not contest the next election, it doesn't matter.

I'd still be surprised if the DUP back this revised map. They have made it pretty clear that their problem is with Northern Ireland losing a seat, and on any reasonable projection of last year's results onto this year's proposals, that lost seat is one of theirs. And even if they did, I'd be very surprised if the restive Tory backbenchers don't seize the boundary recommendations as a whole as an opportunity to give the minority government a kick in the pants that actually does them very little harm; if half a dozen of them decide to rebel, it doesn't matter what the DUP do. So this entire process may turn out to be an exercise in number crunching that has no practical effect.

But when we talk about boundary changes, we must remember that there will always be a next time.

Unease about translation does not just cover the exporting of texts into another language; their importation too can be problematic. Translation’s very existence challenges our understanding of what a literary text is. Further, by asserting that things worth knowing exist outside the home culture’s boundaries, translation challenges society as a whole. Translated works are Trojan horses, carriers of secret invasion. They open the imagination to new images and beliefs, new modes of thought, new sounds. Mistrust of translation is part of the instinctive immune reaction by which every community attempts to preserve its particular heritage and flavor: to control language is to control thought. The realization lends an extra dimension to the well-known Italian saying, “Traduttore, traditore” (Translator, traitor).

I'm not hugely into poetry, but I certainly don't dislike it either, and this is a good approachable set of essays looking at what poetry is and what poets do, informed (often convincingly) by the author's Buddhist philosophy. The chapters on translation are particularly good - it's an issue I grapple with daily in my working life, though of course not usually for poetry.

I knew a lot of the poets quoted, but not necessarily the poems used; the ancient poetry is particularly gripping because of the distance from us in time. I love the eroticism of an Egyptian woman's poem translated by Ezra Pound, and would be interested to find out more about the original:

I find my love fishing
His feet in the shallows.

We have breakfast together,
And drink beer.

I offer him the magic of my thighs
He is caught in the spell.

The more contemporary poet who particularly caught my attention was Czesław Miłosz: Anyway, well worth getting.

This was both the top unread book acquired in 2010 on my unread shelf, and also the non-fiction work that had lingered there longest. Next in those piles respectively are Free Radical by Vince Cable and the Contes Fantastiques Complets by Guy de Maupassant.
Collapse