This time last year, I temporarily rage-quit Livejournal for Dreamwidth in the wake of yet another outage. I came back, obviously, but I'm still not very happy with the fact that this place has turned into a desert. I have to confess that this year I stopped reading my friends list regularly, after 14 years; there's just so much more going on on Facebook, Twitter, Instagram and even (despite its drawbacks) LinkedIn.

However, one benefit of the lower traffic on Livejournal is that quite often I am finding I have got the top post on the whole site for an hour or so. This year the following posts achieved that:

18 Feb: The top names in my address book (2 hours at the top - the others all managed only one hour)
19 Feb: Goodreads/LibraryThing stats: Clarke submission list
17 May: Pounded In The Butt By My Second Hugo Award Nomination, by Chuck Tingle
8 Jul: Wonder Woman in Belgium
30 Jul: Excursion, 21-22 July (lots of pictures)
17 Aug: The Administrator's Tale - part 1 of my 2017 Hugo memories
10 Sep: Along the Dijle with Bo
17 Dec: Which lines of longitude and latitude pass through the most countries?

LJ also tracks when one of your entries gets into the top 25 across Livejournal. In addition to the above, the following entries achieved that (some of these are very odd choices, and I can only assume bot activity as the explanation):

My most commented entries (in some cases including the automatic LJ "top 25" comment) were:

On a more positive note, my sfnal activities clearly still have traction on LJ, relatively more so than on Facebook or Twitter.

Since the community aspect of LJ has almost disappeared, I want to switch to a system which has the tagging, image-hosting and formatting facility of LJ (Dreamwidth doesn't do image hosting very well), and preferably also one that I can transfer back copies of LJ to. I already have a backup wordpress account, but since the LJ importer for Wordpress no longer works, it's increasingly out of date. Open to suggestions. 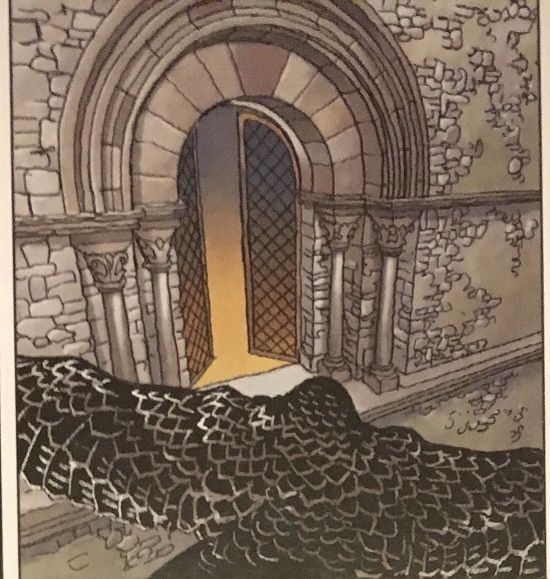 Second frame with dialogue on third page of vol 3 (Eleanor, very pregnant, is having a nightmare about her husband's religious mania):

Second frame on third page of vol 4 (Vincenzo Damonte comes across a tragedy in the forest): Having very much enjoyed the first two volumes in this six-part series about the life of Eleanor of Aquitaine, I also enjoyed the next two, taking the story over the decade from Eleanor's first pregnancy in 1144 to her second marriage in 1152. Volume 3 mainly concerns the disastrous Second Crusade and its consequences, and Eleanor's entanglement with her uncle, the Crusader king Raymond of Edessa, and also with the fictional Vincenzo Damonte. (The authors miss a particularly glorious historical detail when the Pope, anxious to maintain the marriage of Eleanor and Louis VII of France, literally tucked them into bed together; their second daughter was born nine months later, but the marriage did not survive.) Volume 4, back in France, tracks the intersection of the Plantagenets, Duke Geoffrey and his ambitious and good-looking son Henry, with Louis and Eleanor in the early 1150s, and ends with her, newly divorced, marrying Henry (this requires some info-dumping about how he is about to become King of England). Still, the team of Arnaud Delalande and Simona Mogavino (writers) and Carlos Gomez (artist) has breathed a lot of life into the dusty bones of the historical narrative, and I have gone out and got the final two volumes now. 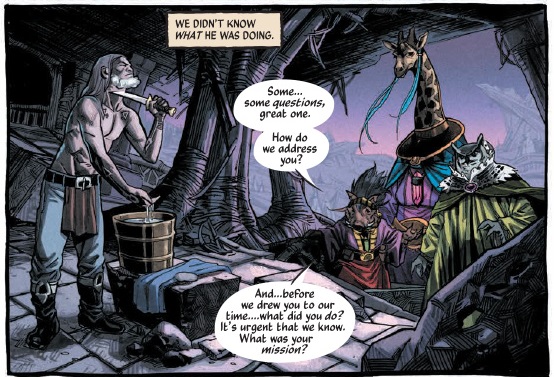 This was flagged up to me last year as being particularly popular among File 770 readers in the run-up to Hugo nominations; when it didn't appear on the final ballot, I guessed that it might have been pushed off by the Puppies and bought it during my brief visit to Portland, Oregon. In fact, it didn't even make the top fifteen of last year's nominations, and probably did well in the File 770 straw poll because Busiek is a frequent (and valued) contributor over there.

I don't think I'd have voted it terribly high on my list if it had made the ballot. The world of the Autumnlands is one where various character who are anthropomorphic animals are in conflict with each other; the wizards of the steampunkish flying city summon an ancient hero who turns out to be a human, like you and me, and outwits the groundling enemy due to his superior human intellect. The one major female character is a sneaky turncoat. I'm never terribly comfortable with the resonances of stories like this, and although it's nicely illustrated, it didn't draw me in.

This had finally made it to the top of my pile of unread graphic novels in English. Next on that list is Providence: Act 1, by Alan Moore.

Well, it's interesting to see how far internationalisation has progressed since the last time I did one of these surveys (and indeed the time before).

Burmese, with more native speakers than Romanian or Dutch, is once again the poor relation, with only 22 out of 29 respondents able to see the characters ဘယ်လ်ဂျီယမ်နိုင်ငံ - I guess this reflects slow adoption of information technology there. It has placed bottom of every poll I have don on this subject.

Both Divehi (the language of the Maldives) and Aramaic managed only 23 for ބެލްޖިއަމް and ܒܠܓܝܩܐ respectively. Both of these are right-to-left scripts related to Arabic, spoken by rather small populations (340,000 for Divehi, maybe a million for Aramaic). Still, Aramaic is culturally important, and the Maldives are a pretty open society, so it's a bit surprising that they don't do better. Aramaic placed second last when I last did this.

The Ge'ez script, also historically a trailing contestant, used for Amharic and Tigrinya got 25 out of 29 for ቤልጅግ. It is used by about the same number of people as the Burmese script.

Those with 28 out of 29 included several smaller South Asian languages, all of which have tens of millions of speakers - Punjabi (ਬੈਲਜੀਅਮ), Telugu (బెల్జియం), Kannada (ಬೆಲ್ಜಿಯಂ), Malayalam (ബെൽജിയം), Odia/Oriya (ବେଲଜିଅମ), Sinhalese (බෙල්ජියම), Khmer (បែលហ្សិក) and Tibetan (པེར་ཅིན།). Devanagari (बेल्जियम), Bengali (বেলজিয়াম), Tamil (பெல்ஜியம்), Thai (ประเทศเบลเยียม), Gujarati (બેલ્જિયમ) and Lao (ປະເທດແບນຊິກ) are all OK. Apart from Tamil, all of these are the most widely spoken language in a particular country, and Tamil is official in Singapore which must help. (Though what about Sinhalese and Khmer, then?)

Also with 28 out of 29, Cyrillic (Бельгия) and Georgian (ბელგია); but surprisingly Armenian (Բելգիա) got the full slate.

There were several South East Asian scripts where I wasn't able to translate the name Belgium - S'Gaw Karen, Sundanese, Batak, Lontara, Balinese, and Yi. I am also missing Tifinagh (used for Berber) and Inuktitut. For Inuktitut, I did find an online dictionary that gave "Belgia" as the translation for Belgium; but the Inuktitut alphabet has no 'b' and no 'e', so I gave up.

Thanks for participating!
Collapse