I spent last weekend in Amsterdam at the Congress of the Alliance of Liberals and Democrats for Europe (ALDE), the European-wide federation of liberal parties. It was a great opportunity to meet up with old friends, and hear some pretty inspiring speakers - the prime ministers of the Netherands, Belgium, Estonia, Slovenia and Luxembourg were all present and spoke.

As an elections nerd, the most interesting bit for me was the conference's choice of six Vice-Presidents from a field of seven. (The President of ALDE, Hans van Baalen, a Dutch MEP fromPM Rutte's VVD party, was also up for re-election, but had no opponent and scored more than 90% of the vote.)

I wasn't heavily involved with the campaigning, and as a mere observer didn't have a vote myself, but I knew four of the candidates personally - Timmy Dooley, the Fianna Fáil TD for County Clare (I was very grudgingly positive about FF joining the liberals in 2009; it has worked out much better than I expected); Ilhan Kyuchyuk, a Bulgarian MEP from the Movement for Rights and Freedoms; Markus Löning, a former German MP and former German Federal Commissioner for Human Rights; and Baroness Ros Scott, a former President of the UK Liberal Democrats. I like and respect them all. I didn't know the other three candidates, Frederick Federley, a Swedish MEP; Joanna Schmidt of the Polish party Nowoczesna; and Annelou van Egmond of the Dutch D66 party (more lefty than prime minister Rutte's VVD).

Had I had a vote, I would have been inclined to vote for the Bulgarian, Polish and Irish candidates, in that their parties are more recent arrivals in the Liberal family and it makes sense tactically to moor them more closely to the group. I'd probably then have thrown in votes for Ros Scott and Markus Löning, since I know and like them; and the D66 crowd grabbed me early on in the Congress and actually got me to wear an Annelou van Egmond sticker, so I would probably have given her my sixth vote. (The system was simply to place up to six X's by the names of the candidates you preferred.)

The actual result reflected the first part of my own thinking, in that the Bulgarian, Polish and Irish candidates topped the poll. But I was dismayed that Ros Scott finished in last place, by a significant margin. (She was 29 votes behind Annelou van Egmond, the sixth-placed candidate, who was only 31 votes behind Timmy Dooley, the third-placed candidate.) 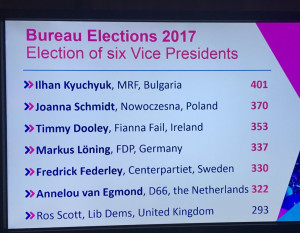 I was surprised, and I wasn't alone. Ros Scott is not disliked by anyone, and had by all accounts worked hard as a Vice-President in the previous term. I had heard that two of the other candidates had performed poorly at hustings; I suspected there might be resistance to having a second person at senior level from the Netherlands, after Hans van Baalen. But other factors prevailed.

My suspicion is that for the ALDE voters, boosting individual party profiles for the 2019 European elections was pretty important. In the 2014 elections, ALDE came narrowly fourth in terms of votes (the far-left GUE group came third, after the mainstream centre-left PES and the centre-right EPP) and also fourth in terms of seats (the conservative ECR managed to scrape together a few more MEPs, including Brian Crowley, formerly of Fianna Fail). A very strong third place is a reasonable and credible target for ALDE in the 2019 elections. (There was some crazy talk of coming second; ALDE is doing well in terms of prime ministers at present, but mainly of smaller countries.)

And, sadly, the Lib Dems are very unlikely to be a factor in the 2019 European Parliament elections, because of Brexit. For the average ALDE voter in Amsterdam, it therefore made more sense to help the parties who will actually be contesting those elections, rather than those who won't.

On the positive side, it's nice to see that a candidate from a Muslim background can top the poll in an internal European liberal election.
Collapse