Mutiny on the Bounty won the Academy Award for Outstanding Production in 1936, the first year in which the trophies were officially called the Oscars. There were eleven other nominees, and again I'm not going to bother to list them. It got nominations in five other categories but did not win any, making it the third and so far last film to win the equivalent of Best Picture and nothing else - the other two were Broadway Melody and Grand Hotel. In four of the other categories it was beaten by The Informer, which sounds like it's right up my street. IMDB users rate several other films of 1935 more highly, in particular A Midsummer Night's Dream starring James Cagney. 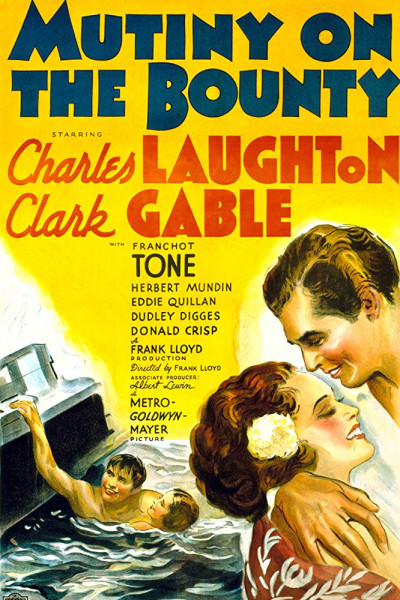 I had never seen either this film or the 1962 remake with Marlon Brando and Trevor Howard, but I was of course familiar with the story - as a child I read R.M. Ballantyne's heavily sanitised 1880 children's novel The Lonely Island, and more recently Trevor Lummis' 1997 historical account Life and Death in Eden (and I have a feeling I read David Silverman's 1967 Pitcairn Island too). It's a historical film, though based on novels by Charles Nordhoff and James Norman Hall, so the first to win the Oscar which was set outside the lifetime of any of the audience. The story, as you surely already know, is of the revolt of the sailors on the Bounty, a British exploration ship in the Pacific in 1787, against the tyrannical captain William Bligh; the mutineers set the captain adrift (and, against the odds, he survived), and settled briefly in Tahiti; some of them then fled much further afield, to Pitcairn Island, where their descendants still live, while the rest were arrested by the next British ship to pass Tahiti, and tried and convicted for mutiny back in London. Here's the trailer:

Oh look, that's Clark Gable again, this time as the mutineers' leader Fletcher Christian - he's the first actor to be in the Best Picture/Outstanding Production two years running, after last year's It Happened One Night (which he himself also won an Oscar for). Another returning face is Herbert Mundin, who played Alfred Bridges in Cavalcade the previous year, and here plays seaman Smith (who in real life was the last surviving of the mutineers on Pitcairn after the others all died horribly; he changed his name to John Adams and gave his name to Adamstown, the only settlement on Pitcairn; in the film however his character doesn't seem to be one of those that go to the island). Here they both are with Charles Laughton as Captain Bligh: Frank Lloyd, the director, also directed Cavalcade; Irving Thalberg, the producer, was also the producer of Broadway Melody (and died, aged 37, in 1936).

I have to say that overall, I found the film moving me rather less than some of the others I've watched. Having said that, once again I'll start with the bits I liked least and work up.

LGBT erasure: No evidence that this is true, but IMDB say that according to Hollywood legend, a shot of one of the sailors pairing off with a Tahitian boy as the other men are enjoying the company of the women was cut by censors. Seems entirely plausible to me.

Charles Laughton: All three of the leading men - Charles Laughton as Bligh, Clark Gable as Christian, and Franchot Tone as the fictional midshipman Byam - were nominated for the Best Actor award, leading directly to the establishment of the Best Supporting Actor category. I was not at all impressed by Laughton here, though in fairness the script gave him little to work with. Captain Bligh is a one-note tyrant, who is given the merest smidgeon of come-uppance at the end. Laughton conveys this with a fixed scowl and carpet-chewing. It would be quite fun for a supporting character but I prefer villains with more depth.

More Act-ING: The first few scenes, set in Portsmouth with a press-gang (anachronistic) and farewells to the female relatives, feel super awkward. Everyone gets into their roles in the end (apart from those we don't see again) but it takes them a few scenes to settle in.

Sing-ING: We keep hearing lusty choruses of sailors singing in the background, but when we see them on screen it's clear that singing is the last thing on their minds.

Script-ING: Now that I have read the book, the script sticks rather too closely to the written dialogue, and often sounds forced.

Gender: This is a manly film about manly men, with the few speaking women as love interests, mothers or sisters. (Though there are one or two comic pedlars in port.) There is little romantic tension - Christian and Byam pretty much fall straight into the arms of their Tahitian lovers. Byam then abandons his Tahitian partner to go back and face the music in England, and we never see what happened to her. However, the film scores rather better on...

Race: Cimarron was the only film so far in this series that credited non-white actors, and that in a way that was super-problematic. (Ira "Buck" Woods did not get a screen credit for It Happened One Night.) Here we have hundreds of Tahitians playing Tahitians, with Bill Bambridge, Hollywood's leading Tahitian actor (though there can't have been many) playing Hitihiti, the chieftain, and leading role credits given to two women of colour, Movita (a Mexican-American, who much later married Marlon Brando, and died only in 2015) and Mamo (not Tahitian either but at least Hawaiian). The Tahitians are a complex and real society, and it’s made clear that the British agenda is ultimately one of exploitation and betrayal. It's not massive progress, but it's the best we've seen so far.

The original novel is anti-Semitic; the Jewish character doesn't make it to the screen version. 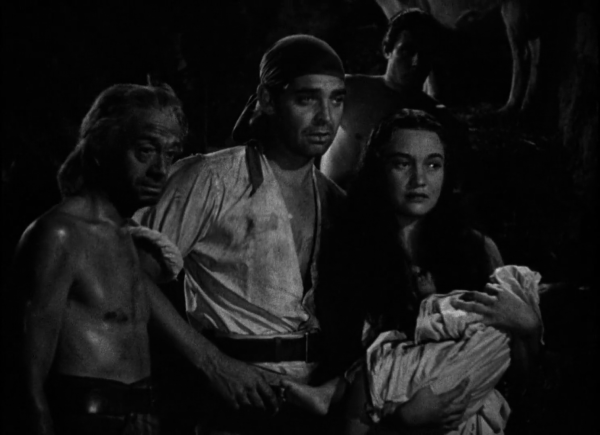 Liberty: I'm trying to decide whether the film is slightly subversive or just anti-British (after all, it's set less than a decade after American independence). I lean to the first option; King George III at the end grants clemency to Byams, rather than reinforcing the authority of Bligh and the judicial system; Christian goes to set up a new Utopian society on Pitcairn (where of course in reality he was killed within four years). It's a rather manly vision of liberty, but I think it's there if you squint. Again according to IMDB, the film was banned in the Empire of Japan as it was feared it promoted revolution. Note particularly Byams' speech to the court (actually the only memorable dialogue in the film):


I don't try to justify his crime, his mutiny, but I condemn the tyranny that drove him to it. I don't speak here for myself alone or for these men you condemn. I speak in their names, in Fletcher Christian's name, for all men at sea. These men don't ask for comfort. They don't ask for safety. If they could speak to you they'd say, "Let us choose to do our duty willingly, not the choice of a slave, but the choice of free Englishmen." They ask only the freedom that England expects for every man. If one man among you believe that - *one man* - he could command the fleets of England, He could sweep the seas for England. If he called his men to their duty not by flaying their backs, but by lifting their hearts... their... That's all.

The other actors: And that brings me to the rest of the cast, who are much less annoying than Laughton as Bligh, even though the script is not terribly exciting. Clark Gable in particular is tremendously watchable.

Cinematography: But let's face it, the spectacular thing about the film is that they built a replica of the Bounty, filmed on board including hurricanes, sailed it to the South Pacific, got 2,500 locals to perform for the camera, and it all looks really fantastic. The stars were shipped only as far as Catalina Island, where a replica Tahitian village was built; you would hardly notice, apart from the angle of the sun. (There's a nice bit of evasion of the new Hays Code by cutting between Fletcher Christian and Maimiti sneaking off for some alone time in the trees, then villagers dancing vigorously, then back to the couple postcoitally snuggling.) At a cost of $2 million, it was MGM's most expensive production to date, and the money thrown at it does show on the screen. (Including canoes shipped to Tahiti from Hollywood because the local ones didn't look authentic enough.) Whatever my complaints about the acting and politics, it looks fantastic. 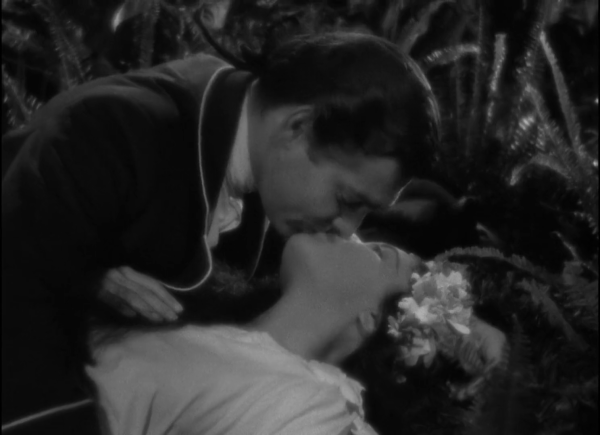 I am reading the books on which the film was based, and will report back when I have finished them.

The next in this series is The Great Ziegfeld, of which I have no expectations at all except that I suppose it is about Broadway musicals, so probably has some singing and dancing.