I’m just starting Nisi Shawl’s Everfair, which made the Nebula finalists this year (but missed the Hugos, finishing 8th on the Best Novel ballot). The frontispiece is this map, which I found a little confusing: 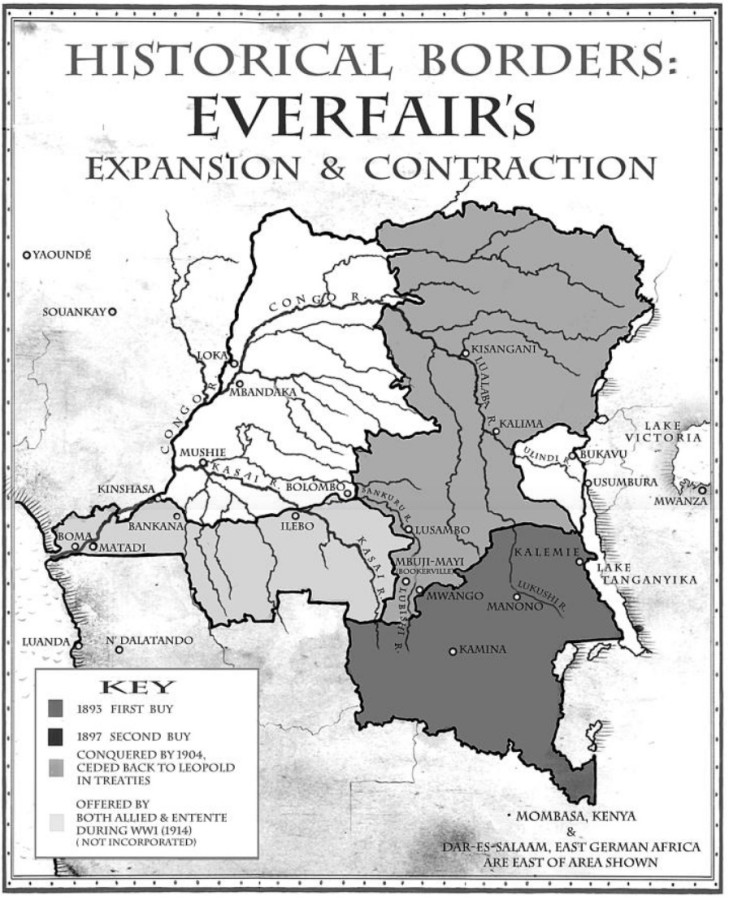 The book is an alternate history where the Fabians create an idealistic colony in the Congo, and the map shows the different stages of its territorial expansion.

The problem is that the map legend has four colours, but the map itself seems to have only three.

My best guess is that the south-eastern corner is the 1893 first buy, the 1897 second buy is missing (I don’t see anywhere on the map coloured that dark), the north-east is the bit conquered by 1904, and the western spur the land offered in 1914.

Maybe it will become clear as I read the book.

Current
Watchmen, by Alan Moore and Dave Gibbons (a chapter a month)
The Bounty Trilogy, by Charles Nordhoff and James Norman Hall
Everfair, by Nisi Shawl
Guided by the Beauty of Their Weapons: Notes on Science Fiction and Culture in the Year of Angry Dogs, by Philip Sandifer

Next books
The Most Dangerous Book: The Battle for James Joyce's Ulysses, by Kevin Birmingham
Alexander the Corrector: The Tormented Genius Whose Cruden's Concordance Unwrote the Bible by Julia Keay
Re: Collections, ed. Xanna Eve Chown
Collapse