My investigation of the pre-urban hydrogeography of the capital of the United States brought me eventually to this paper published by the U.S. Geological Survey in 1977 and written by Garnett P. Williams, better known for his 1997 book Chaos Theory Tamed. It’s a brief, fact-filled yet entertaining survey of the historical evidence of D.C.’s waterways, starting with the springs and working up through the streams, creeks and canals to the Anacostia and Potomac rivers. The Franklin Square springs get half a page, and there is also a description of the stream that they fed, called Goose Creek. “At F Street, near Ninth Street [immediately north of the future site of Ford’s Theater], the ravine carrying the stream was some 14 feet deep. (This was quite hazardous at night, with no street light. On one occasion, Mr. Philip Fendall, a leading member of the bar, fell in and broke his leg in two places.)” However, it was entirely filled in during the mid-1800s. Such is the fate of watercourses which compete with property developers.

Garnett regrets that so many of the old streams have been filled in (the fate of Goose Creek) or covered over, mostly to become sewers, and points to Rock Creek as an example of how a different path could have been chosen. (My comment: of course, Rock Creek is mostly elevated above the flatter topography of the city centre, so it was bound to be more robust in the face of humanity.) He points out how central the vanished waterways were to the city until the later part of the nineteenth century - the White House and Washington Monument were both up against the river shore (the future sites of the Lincoln and Jefferson Memorials under water), and the old canal (obsolete almost as soon as it was built) cut through the heart of the city.

And he concludes that the rivers in particular filled in and narrowed because of massive deposits of sediment, “made available to the rivers over the last 200 years by man’s carelessness”, and calls for more sensitivity to the natural waters of the landscape in city planning. He has a point. 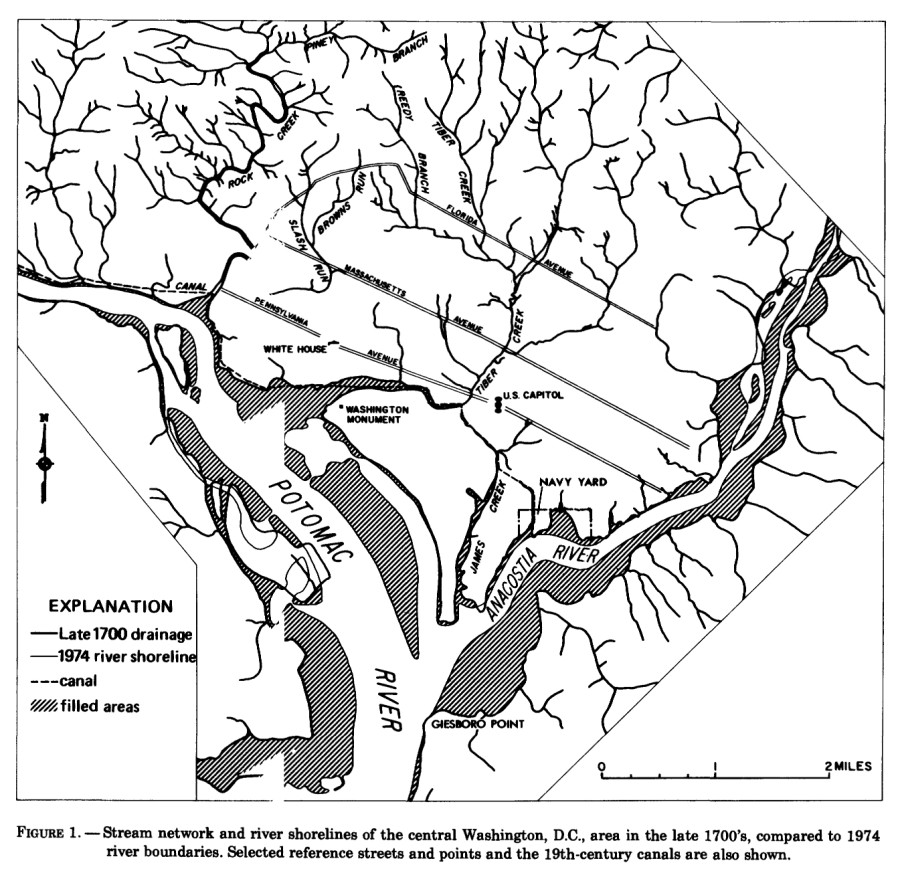