Third poem in the book (actually Catullus 5):Language nerdery alert: This is the first ever recorded use of the word bāsium to mean a kiss; most Latin-derived languages have kept it (French baiser, Italian bacio, Spanish beso) whereas the Latin synonyms ōsculum and suāvium have vanished from the lexicon.

Many many years ago, two friends who were getting married had the nice idea of giving everyone at the wedding one of the Phoenix paperbacks then produced by Orion, and this was one of the two we got. (No idea now what the other one was.) I've dipped into it from time to time, and finally decided to read it through. Less than 120 poems by Catullus survive, all presumed to have been written around 60 BC, and 57 of them are presented in this book (omitting I think the longer and less romantic ones).

It's difficult to sum up poetry, especially translated from a foreign language; I must say the ones that grabbed me most were not the poltiical references (though it's interesting to see disparaging remarks about Julius Caesar from someone who knew him) but the short narrative poems about some particular incident, and the passionate ones like no 5 above, whose first half Sir Walter Ralegh translated thus:

The sun may set and rise,
But we, contrariwise,
Sleep, after our short light,
One everlasting night.

And there's the well known 85: James Michie's translations seem to me to catch both humour and passion, from a writer of over 2000 years ago who still catches our humanity. 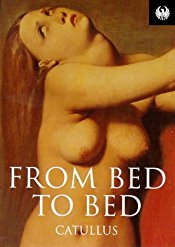