Grand Hotel won the Academy Award for Outstanding Picture in 1932, beating seven films I have never heard of: Arrowsmith, Bad Girl, The Champ, Five Star Final, One Hour with You, Shanghai Express and The Smiling Lieutenant. It did not win any other Oscars, though one of the stars won Best Actor that year for his role in another film. The standout films for the period of eligibility (LA release between August 1931 and July 1932) are surely the Boris Karloff Frankenstein and the Bela Lugosi Dracula, both of which I’m pretty sure I have seen. 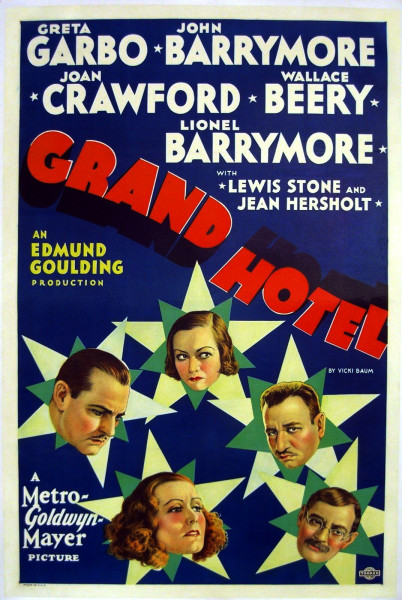 It’s an ensemble piece showcasing the talents of MGM’s biggest stars - Greta Garbo, John Barrymore, Joan Crawford, Lionel Barrymore, a couple of others - as residents of a Berlin hotel over a couple of days when their lives all change, narratives intersecting. It’s based on a play which was a massive Broadway hit, in turn based on a book which was a best-seller. I liked it a lot more than I liked Cimarron. It was the second Best Picture (or equivalent) win for MGM Studios and producer Irving Thalberg after Broadway Melody. Here’s a short trailer:

To go back to my previous practice of starting from what I didn't like and moving forward:

Whiteness: I am sorry to say that yet again there is blatant whitewashing. There is not a single non-white face to be seen on screen. In the book, based on the author’s experiences of working in Berlin’s Hotel Bristol in the 1920s, the Grand Hotel barman is black (though does not speak and is not named) and there is also a jazz band (googling reveals a fair number of black musicians in 1920s German jazz bands). Now that I have started looking for it, I am finding the whiteness of this era of Hollywood increasingly annoying.

Staginess: The film opens with a couple of the important characters info-dumping their plot lines by way of very highly staged phone calls. In fairness, this also gives an excuse for some very nice cinematography of the phone exchange. Some may feel that John Barrymore’s Baron changes his affections awfully fast for the sake of packing a lot of plot into two days of story time, but great stories often involve unusual happenings (and this particular plotline is even more unusual in the book).

It’s all good from here. In particular I’m going to call out the music: there is a certain amount of Strauss, a little Grieg, a little jazz, but most strikingly Rachmaninoff’s piano concerto becomes the Leitmotiv of Garbo’s Grusinskaya, years before Brief Encounter. It’s not intrusive and always works to enhance the action.

Cinematography: The use of the hotel set as performance space is really impressive. I’ve mentioned the phones; the revolving doors, the stairs, the corridors (galleries overlooking the central atrium, handy for filming), the round reception desk. There is lots going on but it feels busy rather than cluttered. The Baron’s climb across the balconies is well done.

Writing: Some great lines, one of which defined the career of the actor who delivered it. Here are some more.

Baron Felix von Geigern: [looking down from the sixth-floor balcony over the front desk] You know, I've often wondered what'd happen to that old porter if somebody jumped on him from here.
Flaemmchen: I'm sure I don't know. Why don't you try it and find out?

Preysing: I don't know much about women. I've been married for 28 years, you know.

Dr. Otternschlag: And what do you do in the Grand Hotel? Eat. Sleep. Loaf around. Flirt a little, dance a little. A hundred doors leading to one hall. No one knows anything about the person next to them. And when you leave, someone occupies your room, lies in your bed... that's the end.

Also I love the way that at the end, after the action is over for our central characters, a newly-wed couple are checking in for more adventures.

The Acting: I confess that the only three stars of the six who I’d heard of were Greta Garbo, John Barrymore and Joan Crawford, and the only one I’d actually seen was Garbo (in Ninotchka). But this is the first Oscar winner in this sequence I have seen that gets more than one really good performance; for my money, all six are pretty good, with perhaps a mild reservation for Lewis Shine, who as Dr Otternschlag doesn’t get as much of a story arc as the other five, but is very watchable when he gets his lines (which tend to be vivid).

Both Lionel Barrymore, as the dying accountant Kringelein, and Wallace Beery, as his bullying (but secretly failing) boss Preysing, were pleasant discoveries. Both get quite a lot to do - Lionel Barrymore in particular takes his character from scary whimpering to a place of much greater serenity.

Greta Garbo is indeed very watchable as fading ballerina Grusinskaya, and one sees why she got top billing, combining pathos and passion with a little bit of comedy. This is the film where she says “I want to be alone.” (NB contrary to legend “want”is pronounced with a “w”, not a “v”.)

Joan Crawford is even better as stenographer and woman of the world Flämmchen. She gets to spark with all of the men, and conveys both self-interest and sexiness without ever taking off a rather unsexy outfit.

But the absolute revelation for me was John Barrymore as the Baron. Terrifically suave and sexy (possibly bisexual - look at the way he chats up Kringelein), yet hiding a facade of impoverished criminality. The most memorable visual scenes are his - climbing across the balconies, the love scene with Grusinskaya, the business with Kringelein’s wallet, the assault by telephone at the end. I’d watch another film with him in it.

Next in this sequence is Cavalcade, based on a Noël Coward play, which has the second lowest rating of Best Picture Oscar winners on IMDB (beating only Cimarron), so I’m not holding my breath.

The original book was a best-seller in the USA in 1931 though it did not top the list (that honour went to The Good Earth by Pearl S. Buck). Because the author, Vicki Baum, was Jewish, it was among the books burned on the Opernplatz in Berlin in May 1933 and subsequently banned by the Nazis. As well as initiating women’s boxing in Germany, with Marlene Dietrich, she published a novel or two every year from 1919 to 1957 (this was her tenth), but the only other well known one is Life and Death in Bali/A Tale from Bali, which was also filmed. Baum moved to the USA to write the script for the Broadway adaptation and then screenplay for this film, and understandably stayed there rather than move back to Germany.

Second paragraph of third chapter:The film does not in fact stray very far from the book. Small differences: in the book, Flämmchen doesn’t appear until a quarter of the way through. We get much more insight into Preysing’s and Kringelein’s marriages. The brutal murder is carried out with a heavy ashtray rather than a telephone handset. The action does move outside the hotel now and then, notably to Grusinskaya’s theatre.

Big differences: the ages of several of the main characters. Grusinskaya, played by 27-year-old Greta Garbo on screen, is old enough to have an eight-year-old grandson in the book. The baron, played by 50-year-old John Barrymore, is in his twenties in the book. (As I said, their love affair is more unusual in the book than on screen; but great stories often involve unusual happenings.) 26-year-old Joan Crawford plays Flämmchen, who is explicitly nineteen in the book, though a very worldly wise nineteen:

The other change that was inevitable for a Hollywood film is to the appearance of Dr Otternschlag, played with mild scarring by Lewis Shine; compare the book’s chilling description:

His face, it must be said, consisted of one half only, in which the sharp and ascetic profile of a Jesuit was completed by an unusually well-shaped ear beneath the sparse gray hair on his temples. The other half of his face was not there. In place of it was a confused medley of seams and scars, crossing and overlapping, and among them was set a glass eye. “A souvenir from Flanders,” Doctor Otternschlag was accustomed to calling it when talking to himself.

Otternschlag gets more to do in the book, and Flämmchen arrives late as noted above, but otherwise the main characters balance out much as they do on screen.

And it’s a good readable story, the first “hotel novel”; apparently a massive hit during its original serialisation (to the point that readers wrote in to protest the killing off of one character in a reaction reminiscent of Torchwood fans’ reaction to the death of Ianto), very firmly moored in the context of late 1920s Berlin, grappling with modernity, with unforeseen and unspeakable horror yet to come (for those of us who know the city now, it’s a bit chilling to have the still intact Gedächtniskirche as a major landmark). Everyone has their arc, and we like and sympathise with all of them, even Preysing to an extent. It’s not deep and meaningful, but it’s well done and very entertaining; and the film does it justice. My edition has a very good introduction by Noah Isenberg which added to my enjoyment. 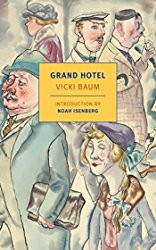