Second paragraph of third chapter (which is actually Chapter 10, as the book keeps continuous numbering from Vol 1):

The Daily Mirror's Sunday magazine tracked down his [David Tennant's] old English teacher, Moira Robertson, who explained how the Tom Baker scarf that Tennant's granny had knitted for him had figured highly in the youngster's life. "It didn't matter what essay or assignment I gave him, he managed to work his granny's scarf into it," she said. "That took real ingenuity. I remember having to explain to him that the exam board wouldn't actually get the point and give him extra marks for it."

I really enjoyed the first volume of this, which concentrated very much on the production history of Old Who. The second volume is a bit less surefooted. The first chapter, about the various attempts to revive the franchise (including The Movie), did tell me things I didn't already know. But from 2003 on, as Kirkley himself notes, he is in contemporary territory and therefore less able to give salacious details; he rather unhelpfully suggests that interested readers consult back issues of Private Eye to get the gossip.

Kirkley's approach to chronology is to tackle aspects of the production (largely based on newspaper reports) as they were happening, and then to talk about reaction to the series as it was broadcast, which means that some individual episodes are covered twice or more depending on whether he's talking about the making or the showing. This is a bit confusing, and also rather crowds out discussion of parts of the Whoniverse other than the main TV series; books and audios are touched on sporadically, the K9 spinoff gets a paragraph (OK, it's not worth much more), and even the Sarah Jane Adventures and Torchwood are somewhat skimmed.

I did enjoy his assessments of the success or otherwise of individual episodes, which I mostly agreed with (most notable point of divergence: Torchwood Season 2, which I rather liked). The book actually goes up to the end of 2015 rather than 2013 as the title suggests. It's as entertainingly written as its predecessor. But I didn't get as much out of it.

(And Brian Minchin was not actually born in Aberystwyth, but that's a minor detail.) 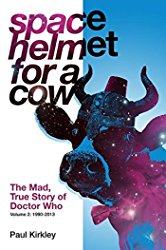