Residents of Anglo-Saxon and Celtic jurisdictions may not be familiar with the concept of a certificate to confirm your criminal record, or preferably the lack thereof. In countries with a more Napoleonic tradition of bureaucracy, where residents must register at the town hall (rather than the charming British/Irish/American tradition of leaving each local authority to guess at the size of its population between censuses), one of the many official documents that one may need and can usually get is what’s called in Flanders the “uittreksel van de strafregister”, an extract from the criminal register which hopefully will demonstrate that you are not on it.

As it happens, I need such an “uittreksel” at the moment, to satisfy a non-Belgian (but European and Napoleonically bureaucratic) potential client that I am not a wrong’un; this is the last step in what has been a long process of finalising a decently large contract, and it’s understandable that the client wants reassurance about the credentials of our team.

So I checked the website of the local police station, as I vaguely remember going there for a similar purpose many years ago. The website is fairly clear on how I can get the “uittreksel”:

It basically says you get your “uittreksel” at the town hall. So I checked my town hall’s website. 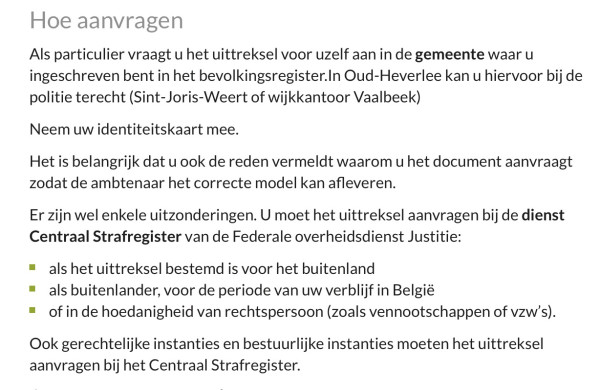 OK, this is a bit worrying. The paragraph starts with boilerplate languge about how in Belgium you can request the “uittreksel” from the town hall; but then it says that in our municipality, you go to the police. Whose website, if you recall, says you should go to the town hall.

OK, so I consulted the Federal Ministry of Justice website. Guess what it says? 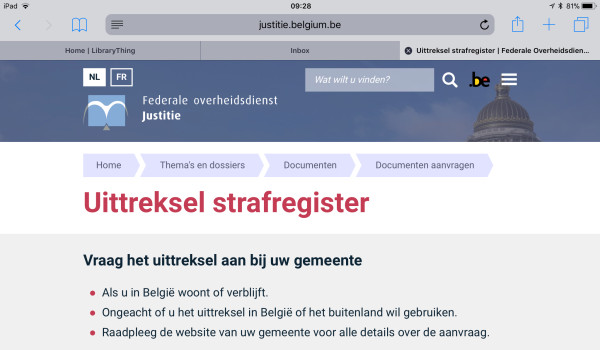 Yes, the Federal Ministry of Justice site says that you go to the town hall, whether or not you need the “uittreksel” for Belgium or for another country. No mention of going to the police.

So I went to the town hall, since the other two both said that was the way to go. It's not massively convenient, as it's in the next village, but I was working from home anyway. The town hall told me that they don't issue “uittreksels” at present; they will be responsible for issuing them from 1 January, but until then I needed to talk to the police across the road.

So I went to the police. Our municipality is the fourth richest of the 589 in Belgium, so crime levels are correspondingly low; and the duty officer greeted me cordially. I mentioned that I needed the “uittreksel” for a foreign client, but he did not seem interested beyond the fact that it was for professional purposes (“Beroepsdoeleinden”) and typed it all up in about two and a half minutes. 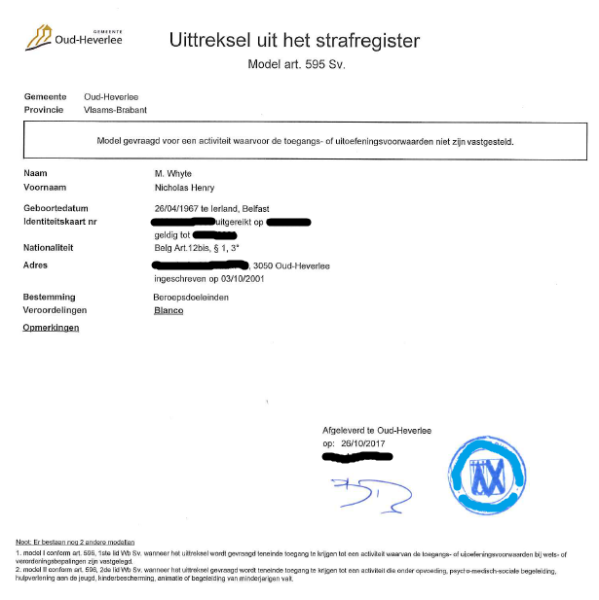 76 days on from the awards, I think it's OK to reveal my own preferences in the category that was hardest hit by the recent unpleasantness, with No Award (rightly) winning in 2015 and 2016. Thanks to the new arrangements, we had six viable candidates this year, and No Award came last.

They asked me to tell you what it was like to be a pregnant girl—we weren’t “women” then—a pregnant college girl who, if her college found out she was pregnant, would expel her, there and then, without plea or recourse. What it was like, if you were planning to go to graduate school and get a degree and earn a living so you could support yourself and do the work you loved—what it was like to be a senior at Radcliffe and pregnant and if you bore this child, this child which the law demanded you bear and would then call “unlawful,” “illegitimate,” this child whose father denied it, this child which would take from you your capacity to support yourself and do the work you knew it was your gift and your responsibility to do: What was it like?

I found this collection of essays full of wisdom and wit, often making fun of people who deserve it. It made me feel like I was in conversation with a vastly intelligent and immensely compassionate old friend. I voted for it with no hesitation. It won by the narrowest margin of the night, 32 votes.

Clients come to you because sales are down, or a new competitor is in town, or they’ve been told they need “a website” or “a radio ad.” And a lot of the time you have to just be an order taker and do those things, even knowing that’s not the real problem. It’s like coming to your therapist and saying you have depression but what you really need to get better is a Snickers bar so if the therapist could just give you one, that’d be great, and you go on your merry way and wonder, three months later, why you’re still so depressed even though you got the Snickers bar you asked for, so you say it’s because you have a shitty therapist.

Includes the most recent previous winner of the Best Related Work Hugo, "We Have Always Fought...". I deducted points for one piece where my take was rather different from hers, but in general this is the sort of interesting and often angry writing about genre that is firmly in the Le Guin mould, except several decades younger. In a different year, I'd have been tipping it to win. Having crushed all others at nominations stage, it came a respectable third in the actual voting.

My third vote went to Neil Gaiman's A View From The Cheap Seats. Second paragraph of third essay:

There are some nice pieces here, particularly if you are interested in the craft and career of writing either prose fiction or comics (which I confess I'm not particularly). There are some very passionate pieces as well. Nothing wrong with it! Just that I liked the other two more. The voters put it fourth. Although it had slate support, I am inclined to think it would have made the final ballot anyway.

I actually expected Carrie Fisher's The Princess Diarist to win, though it got only my fourth preference. Second paragraph of third chapter:

Everything was a little worse for the wear, but good things would happen in these buildings. Lives would be led, businesses would prosper, and men would attend meetings—hopeful meetings, meetings where big plans were made and ideas were proposed. But of all the meetings that had ever been held in that particular office, none of them could compare in world impact with the casting calls for the Star Wars movie.

It is a brutal reminiscence of youth from a woman who (though she did not know it) had only a short time to live after writing it down, making it clear how she was exploited by those around her and how clearly she sees that now. I think it will be pretty irresistible to those who loved her performance both on and off screen, especially if they haven't read a lot of showbiz memoirs (personally, I've read a lot of books by and about Doctor Who people, so I'm more familiar with this sub-genre). It did in fact come within 32 votes of winning, and secured second place by a narrow margin over The Geek Feminist Revolution.

Is the villain the leader who starts the movement? The demagogue who decides to rally the tiny cruelties that live within the hearts of people who think of themselves as good? Is it the person who blows on the embers of hatred until they finally catch and erupt into an all-consuming flame?

I'm not a massive Potter fan (though I have no quarrel with those who are) and I found these pieces a bit one-note. Perhaps if I were more deeply immersed in the Potterverse I would have liked them more. If there had been only five finalists as in previous years, this would not have made the ballot. Like me, the voters ranked it fifth.

Sixth, both on my own ballot and as ranked by the voters, was Traveler of Worlds: Conversations with Robert Silverberg, by Robert Silverberg and Alvaro Zinos-Amaro. Second paragraph of third chapter:

In fairness, it's not all as dull as this extract would suggest. But I'd have liked to hear more about Silverberg's attitude to his own work, and the book lacked a chronology or other analytical apparatus. The voters were similarly unexcited and raked it sixth.

NB that I have pre-set this to post while I am on a business trip in Africa and won't be able to respond quickly.