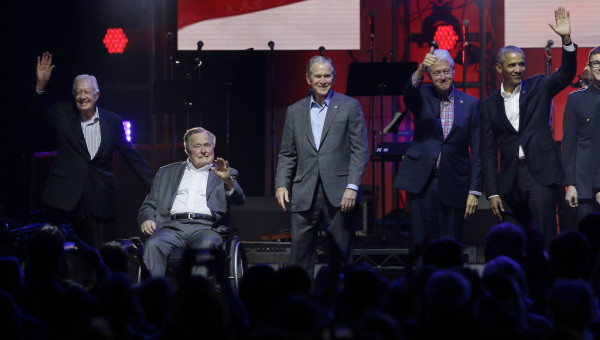 Last week’s photograph of former presidents Jimmy Carter, George Bush Sr, George Bush Jr, Bill Clinton and Barack Obama was a striking reminder that, for only the fourth time in history, there are five living ex-Presidents of the United States. The other three occasions were in the first three years of George Bush Jr’s term, when Gerald Ford and Ronald Reagan were still alive (until Reagan died in 2004); in the first year of Bill Clinton’s term, when Richard Nixon was still alive; and rather more obscurely, between March 1861 and January 1862, in the first few months of Abraham Lincoln’s Presidency, when James Buchanan, Franklin Pierce, Millard Fillmore, John Tyler and Martin Van Buren were all living (Tyler’s death ended that period).

This is also only the second time in history when there have been six living former Vice-Presidents - Walter Mondale, George Bush Sr, Dan Quayle, Al Gore, Dick Cheney and Joe Biden. (The previous occasion was again the first year of Bill Clinton’s term, when Richard Nixon, Spiro Agnew and Gerald Ford were all still alive.) Of course, if Donald Trump resigns or is removed from office, and Mike Pence takes over, we will have fresh records for both living ex-Presidents and living ex-Vice-Presidents.

I suspect it’s unlikely to happen again any time soon - the combination of Bush and Carter’s longevity, and the youthfulness of Bill Clinton and Barack Obama’s as candidates, is relatively unusual. In former times, candidates were generally younger than in more recent years, but they also had shorter lifespans. Also, deaths in office (Kennedy, FDR, Harding, McKinley, Garfield, Lincoln, Taylor and W Harrison) or shortly after leaving office (LB Johnson, Coolidge, Wilson, Arthur, Polk, Washington) used to be more common.

It’s interesting (to me, anyway) that unsuccessful presidential candidates have tended to live longer - apart from Horace Greeley, who died just after losing in 1872, only one other leading but unsuccessful contender did not see the next election: Wendell Willkie, who lost in November 1940 and died in October 1944.

Well, I’m glad I’ve got that out of my system. (Written this morning en route to Eurostar, set to post once the East Coast wakes up.)
Collapse