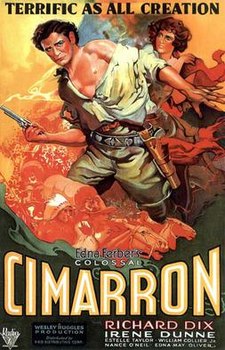 Cimarron won the Academy Award for Outstanding Production in 1931, beating East Lynne, The Front Page, Skippy and Trader Horn. I haven't seen or heard of any of the others. I have seen City Lights, which was released in the August 1930-July 1931 eligibility window, and is a far far better film. It did not get a single Academy Award nomination. Cimarron was the first film to be nominated in every eligible Oscar category, and won two of the others - Best Writing and Best Art Direction. Here is a recent trailer:


Cimarron is the lowest-ranked of any winner of the Oscar for Best Film by IMDB users. So at least the only way from here is up. I too thought it was awful. It was received with great critical acclaim when first released, but has not aged well. It's the story of a young couple who settle in Oklahoma after the land rush of 1889; he is a lawyer, a newspaper editor and a bit of a rogue; she is from a Southern family and has some difficulty adapting to life in the new town of Osage. The story takes us from 1889 to the present day (ie 1931) and, no apologies for spoilers, she gets elected to the U.S. Congress from Oklahoma and ends the film in a chance encounter with her long-estranged husband when he is killed in an industrial accident on one of them new oil fields.

The very set-up of the film is to present the massive theft of land from the Indians as a great civilisational step forward - and actually the opening scene of the land-rush is pretty thrilling and well done cinematically, if you can ignore what it actually meant. As with all previous films I have watched in this sequence, the world presented by Hollywood is a white one - there is one young black character, who is horrifically casually disposed of in a gunfight. The Indians are portrayed as noble savages willingly moving aside for the white settlers, though it gets a bit awkward when our protagonists' son marries the maidservant (who is the daughter of the local chief).

The star of the film, Richard Dix, playing the erratic Yancey Cravat, does rather well with somewhat odd material. His best moment is an electrifying defence of the leading sex worker in town, who is on the verge of being thrown out of Osage despite her contributions to society. But I couldn't really understand what his wife and the other townspeople see in him; for some reason, he is invited to preach at the town's first religious meeting in a early scene, and shoots a recreant dead from the pulpit, withourt further consequence.

Irene Dunne, as the heroine Sabra Cravat, doesn't get to do much other than look appalled and horrified by the wild society that she has been dragged into, continuing to run her husband's business in his absence until her political success at the end of the book. I didn't feel her heart was in it. She went on to greater things, apparently.

The whole film is jarringly episodic, skipping decades in a blink. I was mystified by its success.

And then I read the book by Agnes Ferber, on which the film was based; it was America's best-selling novel of 1930. To get the basics out of the way, here's the second paragraph of the third chapter.

Twice a year, chaperoned by old General “Bull” Plummer, the Indians swept through the streets of Wichita in their visiting regalia—feathers, beads, blankets, chains—a brilliant sight. Ahead of them and behind them was the reassuring blue of United States army uniforms worn by the Kansas regiment from Fort Riley. All Wichita, accustomed to them though it was, rushed out to gaze at them from store doorways and offices and kitchens. Bucks, braves, chiefs, squaws, papooses; tepees, poles, pots, dogs, ponies, the cavalcade swept through the quiet sunny streets of the mid-western town, a vivid frieze of color against the drab monotony of the prairies.

Cimarron is a really good book, a feminist text (the words "feminist" and "feminism" are actually used) whose guts were torn out of it by Hollywood. The central character of the novel is Sabra Cravat, daughter of a Southern family who moved to Kansas after the Civil War; having married Yancey at a very young age, she is swept off to Oklahoma by him. She breaks away from the stereotypes of her Southern parents, and gets over many of her own hangups, to build a new version of society in the town of Osage, to the point where she herself is elected to Congress. Cimarron was the best-selling novel in America in 1930, and the film's popularity must surely have been a reward for its insipid reflection of the popular original text. I was struck that the opening titles featured the characters and actors playing each, which looked like an assumption that many viewers would already be familiar with them.

However, we are a long way from intersectionality, and the book is still pretty racist, if not quite as racist as the film. There is still only one named black character (who suffers an even more horrible end than his screen version), though it's also clear that there are lots of others in the town. While Sabra's view of the Indians is pretty bigoted, the unreliable Yancey is totally on their side, and preaches to her frequently about the disgrace of the Trail of Tears and the awful things that white men have done; this is somehow dropped from the film. (Also worth noting that the Vice-President of the United States at the time the film was made was actually descended from the Osage tribe, and remains the only Native American to have served at the top of the executive branch.) The one Jewish character is sympathetically treated in both book and film, but the nasty anti-Semitism of the baddies in the book doesn't make it to the screen.

The feminism of the book is completely erased by the film, in that Yancey is given much more screen time and better lines (though his defence of the Indians is removed), and we are cut off from Sabra's internal dialogue, which is the loudest voice in the novel; it is replaced by Turner’s sighs and meaningful glances. The sub-plot with the sex workers in the book is explicitly a dialogue about different visions of womanhood in the new society that is being built, but becomes just a humorous set of vignettes in the film (apart from Yancey's courtroom defence of Dixie Lee, which in fairness is actually done better on screen than on the page). I'm not especially well versed in the early twentieth century history of American feminism, but it seemed clear to me that the makers of a Hollywood blockbuster did not feel able to reflect the feminism of their source text.

I enjoyed the book much more than I had expected to, and the film's success was surely in large part a homage to the work it was based on.

The next film in this sequence is Grand Hotel, starring Greta Garbo, also based on a book which I guess I will also get and read.