In our Anglo-American society — a relatively indoor one — when a performance is given it is usually given in a highly bounded region, to which boundaries with respect to time are often added. The impression and understanding fostered by the performance will tend to saturate the region and time span, so that any individual located in this space-time manifold will be in a position to observe the performance and be guided by the definition of the situation which the performance fosters.

This is the first of three books on human behaviour which I read over the last few months and am writing up this week. I've no idea how I came across it; it was published in 1956, and is presented as a work of sociology, though I must say I would see it more as an anthropological analysis.

Goffman takes the theatre as his metaphor and calls attention to how, in their social interactions, human beings are often consciously (or sub-consciously) playing a role, using props such as clothes, tools, buildings, and performing to different audiences in different characters. It would be going too far to say that he has discovered the secret to understanding why everyone does everything, but the concept I think is a useful tool for unlocking particular situations and conversations in terms of their setting and format as much as (or even instead of) their content. His observations of how the staff behave in Scottish hotels - very differently depending on whether they are in front of guests or not - were particularly interesting for any client-facing workers. The style is of course a bit dated now, but the material is very interesting.

This was my top unread non-fiction book, both on Librarything numbers and as recommended by you. Next on those lists respectively are The World of Yesterday, by Stefan Zweig, and The Most Dangerous Book: The Battle for James Joyce's Ulysses, by Kevin Birmingham. 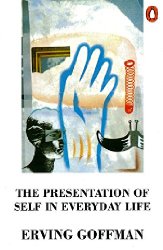