Zhu Di and his father, Hong Wu, had encouraged the development of every aspect of navigation. A handbook titled Notebook on Sea Bottom Currents, found in Quanzhou, states that, after announcing the ascension of the Yongle emperor (Zhu Di) to the throne, Zheng He and his admirals were instructed to search for navigation charts, collecting all the information about currents, islands, mountains, straits, and the positions of stars. They used this data to revise their navigation charts, including compass points and the cross-references of stars.

I was warned; this book is total tosh. The contention is that Chinese knowledge was spread to Italy via a treasure fleet which sailed through the Red Sea-Nile canal in 1434. I smelt a rat when reading the chapter on celestial navigation, which is surprisingly poor for an author who claims to be ex-Navy, and started wondering when we would get some actual evidence for his claims. 50 pages in, I started googling and discovered that a lot of people had been there before me; there simply is no evidence whatsoever that Zheng He got as far as Italy in 1434. (He did get as far as the Red Sea, which is surely impressive enough.) Poorly researched, poorly argued and poorly written, and I'm generously going to include it in my non-fiction rather than fiction tally. I am hesitating whether even to give it to the charity shop, out of concern that someone might buy it and believe it.

This made it to the top of my pile of books acquired in 2011. Next on that list is The Story of English in 100 Words, by David Crystal. 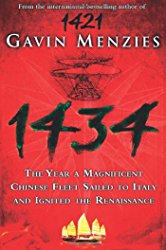