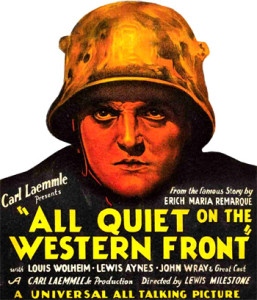 This is the first of the Oscar winners for Best Picture (in this case, "Outstanding Production") that I had actually seen before. It beat four films I have not heard of, The Big House, Disraeli, The Divorcee and The Love Parade in the Academy vote, and also tops the IMDB ratings for the relevant time period. Lewis Milestone also won the Oscar for best Director. It is also interesting (to me anyway) that the top film of 1930 was based on the top book of 1929 as measured by Publisher's Weekly.

If you don't know, it's a film about a young man who signs up for service in the first world war, and discovers that military life is not as glamorous or honourable as he had been led to believe, with his friends gradually becoming casualties until( Collapse ). The fact that it's set in Germany (due to being based on a German book) enables the questions about war and peace to be put to non-German audiences without challenging their own patriotism, other than perhaps raising the uncomfortable question that other people's patriotism may be just as valuable as your own. The film (and the book) offered nothing but disillusion and defeat from militarism. It's notable that most of the extras were genuine German army veterans who had emigrated to California after the war.

(The film itself was banned in Germany under Hitler; when it was first shown, the Nazis, still three years from power, disrupted cinema showings.)

It's a far, far better film than Wings or Broadway Melody, and I can't bring myself to treat it in the same way as I did them. (Though even here there is whitewashing - there are black soldiers in the book, colonial troops on the Allied side, omitted from the film.)

The dialogue tips towards the earnest at times as well. But in general it is well done, and some elements have found there way into most war films since. There's a clear parental relationship to Blackadder Goes Forth, 59 years later and 28 years ago:

Albert Kropp: Ah, the French certainly deserve to be punished for starting this war.
Detering: Everybody says it's somebody else.
Tjaden: Well. how do they start a war?
Albert Kropp: Well, one country offends another.
Tjaden: How could one country offend another?
Tjaden: You mean there's a mountain over in Germany gets mad at a field over in France?
[Everyone laughs]
Albert Kropp: Well, stupid, one people offends another.
Tjaden: Oh, well, if that's it, I shouldn't be here at all. I don't feel offended.
Katczinsky: It don't apply to tramps like you.
Tjaden: Good. Then I could be goin' home right away.

It's sad to note that Lewis Wollheim, who as Katszinsky steals the show from Lew Ayres' romantic Paul Bäumer, died only a year later in 1931 at the age of 50.

At 133 minutes it's quite slow going, but the buildup is worth is as the really good scenes come towards the end. First, Paul and two friends manage to buy the affections of three French girls near the battlefield, bartering food for sex. Most of this is told by nudges and hints but it's all the more effective for that. Then Paul returns home for a confrontation with the teacher whose rhetoric encouraged him to sign up in the first place.

Professor Kantorek: You've come at the right moment, Baumer! Just at the right moment!
[to students]
Professor Kantorek: And as if to prove all I have said, here is one of the first to go! A lad who sat before me on these very benches, who gave up all to serve in the first year of the war. One of the iron youth who have made Germany invincible in the field! Look at him. Sturdy and bronze and clear-eyed! The kind of soldier every one of you should envy! Paul, lad, you must speak to them. You must tell them what it means to serve your fatherland.
Paul Bäumer: No no, I can't tell them anything.
Paul Bäumer: You must, Paul. Just a word. Just tell them how much they're needed out there. Tell them why you went, and what it meant to you.
Paul Bäumer: I can't say anything.
Professor Kantorek: If you remember some deed of heroism, some touch of humility, tell about it.
[encouraging murmurs from the students]
Paul Bäumer: I can't tell you anything you don't know. We live in the trenches out there, we fight, we try not to be killed; and sometimes we are. That's all.

And finally he returns to the Front, and to his doom. It's a gut-wrenching sequence, which stuck in my memory from the first time I saw the film on late night TV as a teenager. Tremendous stuff, and I'm glad to have found an excuse to revisit it.

I was sufficiently interested by the film to track down the book by Erich Maria Remarque (an interesting character whose lovers included Marlene Dietrich and who ended up married to Paulette Goddard; meanwhile his sister, who had stayed in Germany, was executed by the Nazis basically for being his sister). He wrote a number of other books, including a sequel to All Quiet..., but it's on this that his reputation rests, quite rightly. Second paragraph of third chapter:It's a tightly constructed first-person account of the awfulness of the war, apart (necessarily) from the final paragraphs. The film adds and takes away. Most notably, it has a clear narrative from start to finish, whereas the book starts in medias res with the story about the soldiers demanding double rations because only 80 of the 150 men have come back from the latest action and there is therefore some over-catering.

The book dispenses with scene-setting - Professor Kantorek's recruitment of the eager students is disposed of in a flashback paragraph, and his later fate is to be humiliated as a member of the Home Guard; Bäumer has no disillusioned return to the schoolroom. On the other hand, the book includes much more graphic details than could be filmed - the death of horses; the latrines; the blood of the battlefield (in the film nobody seems to bleed much when they are shot).

The passage with the three French girls is played completely differently in the book and the film. In the film, Paul is an innocent grabbing a first and last moment of sexual comfort near the battlefield. In the book, it's clear that he, like all his fellow soldiers, has been a regular client of military brothels, and the encounter with the French girls is wordless and desperate, and not really sweet.

I was pleased though that the dialogue I quoted above from the film is rooted strongly in a similar passage from the book:
Anyway, reading that has been an unexpected bonus for this project. 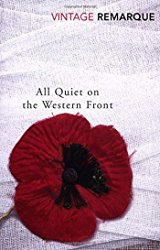 Next up in the Oscar films list is Cimarron, of which almost the only thing I know is that it's a Western and was like All Quiet on the Western Front based on a best-selling novel.