It was only when they stopped at a crossroad and placed shining white eggs on the ground, that I noticed they all wore white smocks. Their faces were veiled. The veils had holes through which I could barely see their eyes. After they had made their offering at the crossroad they bounded on through the streets, past scenes of rioting, and into the forest. They ran through pitch darkness, through silence and mists, and into another reality in which the gigantic Masquerade was riding a white horse. The horse had jagged teeth and its eyes were diamond bright. There was a piercing cry in the air. When the Masquerade and the white horse vanished, I noticed that the forest swarmed with unearthly beings. It was like an overcrowded marketplace. Many of them had red lights in their eyes, wisps of saffron smoke came out of their ears, and gentle green fires burned on their heads. Some were tall, others were short; some were wide, others were thin. They moved slowly. They were so numerous that they interpenetrated one another. The women ran through these beings without any fear.

This was a Booker Prize winning novel that somehow ended up on our shelves. I was surprised to find that it's actually a magical realist novel, based very firmly in Nigerian tradition, looking at village life in a developing country from the point of view of a supernatural child, in tune with the disruptions caused both by humans and non-human forces. There's not actually a lot of plot but the writing is very immediate and immersive, and having had no expectations one way or the other, I really enjoyed it.

I've argued before that we all need to be paying more attention to Nigeria. Nnedi Okorafor is doing well these days too. And I'm really glad to see that Tochi Onyebuchi, who I got to know through Livejournal a decade ago, is now a rising star. 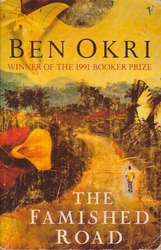