Second paragraph of third story ("The Known of Kensal Rising" by Josh Appignanesi - one of the prose pieces, most are in comics format):

"It's all right, Dad," I said. "You don't have to take that tone with me. Just... tell me how you are." We had stopped walking. There was a moment like a short folding in time. From beneath a furrowed brow, without making any sound, he said, "I'm just so fucking lonely."

A collection of short pieces about London, of which the two standouts are "The Court" by Neil Gaiman and Warren Pleece, and "I Keep Coming Back" by Alan Moore and Oscar Zárate; most of the rest are little more than vignettes and some of them are a bit confused at that. Originally published in 1996, this 2012 edition has more material (though does not indicate what has been added). 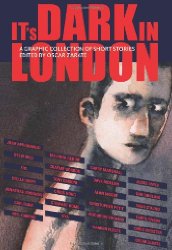