So, a couple of months ago I wrote a short article for a book edited by a chap I know, for free.

Now I discover that the book is for sale for €690. No, there is no missing decimal point. That's the discount rate for early orders. The full price is €890.

Well, you won't be getting my free labour again.

Sam hadn’t really expected anyone to bother her about the insulin pump hanging on her side. The most attention anyone had given it was to screen it for off-color blips, and the security guard at the Bay jumper hadn’t even done that. He’d just grinned at her, displayed his own pump, and said, ‘Pray for better tissue matching, eh, sister?’ Airport security was interested only in weapons and explosives, not unlicensed or bootlegged computer equipment. Besides, it really had been an insulin pump once, before she’d gone to work on it.

I have to admit that cyberpunk has never really been my thing, and I rather bounced off Synners (short for "synthesisers", people who have allowed their brains to be surgically augmented with devices that allow them to interface directly with computers. It was written in 1991 so the tech has dated rather badly; and I found the proliferation of characters and scene setting, and the fact the the plot doesn't really start until half way through, difficult to engage with. I've greatly enjoyed Pat Cadigan's recent short fiction, but this didn't work for me.

It obviously did work for the 1991 Clarke Award judges since they picked it ahead of Eternal Light by Paul J. McAuley (runner-up), The Hyperion Cantos by Dan Simmons, Raft by Stephen Baxter, Subterranean Gallery by Richard Paul Russo and White Queen by Gwyneth Jones. As previously noted, White Queen was a joint winner of the first Tiptree Award that year, the second Hyperion book won the BSFA (for which Eternal Light was also shortlisted). Synners was on the Nebula shortlist (the winner was Stations of the Tide by Michael Swanwick; the Hugo went to Bujold's Barrayar). I am not sure if I have read Raft; I am sure I haven't read the McAuley or Russo. Next in my sequence of award winners is the Simmons, which I read years ago but have not written up. 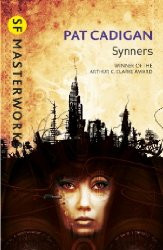