As originally published, Robinson Crusoe has no chapters. One later edition has the following as the second paragraph of the third chapter:

When I had passed this resolution about ten days longer, as I have said, I began to see that the land was inhabited; and in two or three places, as we sailed by, we saw people stand upon the shore to look at us; we could also perceive that they were quite black, and stark naked. I was once inclined to have gone on shore to them; but Xury was my better counsellor, and said to me, "No go, no go." However, I hauled in nearer the shore that I might talk to them, and I found they run along the shore by me a good way: I observed they had no weapons in their hands, except one, who had a long slender stick, which Xury said was a lance, and that they would throw, them a great way with good aim; so I kept at a distance, but talked with them by signs as well as I could; and particularly made signs for something to eat; they beckoned to me to stop my boat, and they would fetch me some meat. Upon this I lowered the top of my sail, and lay by, and two of them ran up into the country, and in less than half an hour came back, and brought with them two pieces of dry flesh and some corn, such as is the produce of their country; but we neither knew what the one nor the other was: however, we were willing to accept it, but how to come at it was our next dispute, for I was not for venturing on shore to them, and they were as much afraid of us: but they took a safe way for us all, for they brought it to the shore and laid it down, and went and stood a great way off till we fetched it on board, and then came close to us again.

OK, who remembers this?

Those of you who are not around my age or not from the same country as me may not be aware that during the UK school holidays in the early 1970s, the BBC would show episodes of a long long French dramatisation of Robinson Crusoe, rather vaguely following the plot of the book. It was all a bit above my five-year-old appreciation, but it meant that a generation who might have never read the book became familiar with the bare bones of the story. And it's a good story, after all - self-sufficiency in desperate circumstances strikes a chord with a lot of us. It's interesting that two of the three questions that OKCupid found are the best predictors of a relationship's long-term potential speak to this - "Have you ever traveled around another country alone?" and "Wouldn’t it be fun to chuck it all and go live on a sailboat?"

The book itself is a bit more rambling than I had remembered. The core part is Crusoe's isolation on the island, in my edition from the shipwreck on page 64 until he starts to rescue Friday on page 205, just about half of the book (text runs from page 18 to page 310). But the part with Crusoe and Friday alone together (mainly having religious debates, all of which Crusoe wins) is actually rather short - by page 231 they are rescuing other prisoners (creating what he himself calls a colony, with himself as king/governor) and Crusoe leaves the island on page 274 with thirty pages of international financial wrangling still to go.

Probably most readers completely forget about that last part, but Angus Ross in the introduction to my Penguin edition points out that the economics of the situation, even for the lengthy period without any actual money, are really important to Defoe; Crusoe is always counting up his resources and working out what he can do with them. It's only reasonable that there is a theoretical Robinson Crusoe economy with no trade and a single economic agent. The economics of the book have stood the test of time better than its theology.

This was the most popular book on my shelves that I had not reviewed online. Next in that list is Charlie and the Chocolate Factory, bu Roald Dahl. 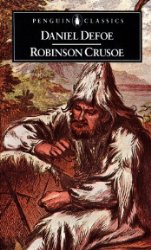