Midway through the afternoon we turned onto another trail. It led north into an area of low hills. The soil was sandy. The trees were small and scrubby. Here and there we came upon outcroppings of a sandy rock, yellow or dull orange. The trail was barely visible: a faint line that wound among the rocks and trees. It led finally—in the late afternoon—to a shack, made of long branches leaning against rock. Skins were stretched over the branches. Smoke came out of a hole. What a sad little dwelling place!

I enjoyed A Woman of the Iron People a lot. It's a great piece of speculative anthropological writing, about vulnerable Earth people exploring a planet where gender roles are very different from ours (men live solitary hunting lives, and possibly are not all that bright; women run all the settlements and technology). The tensions in the human starship crew and among the locals are sharply defined. It's in the shadow of The Left Hand of Darkness, obviously, but I thought Arnason managed the exceptionally difficult feat of creating an alien society and then concentrating on those who are deviant within that society's own constraints - by contrast, Gethen seems to be full of "straight" Gethenians.

This won the very first Tiptree Award back in 1992, along with White Queen by Gwyneth Jones, which failed to grab me. This is part of my ongoing series of reading Tiptree, Clarke and BSFA winners in chronological order, except where I've already written them up recently, so it follows from the winners of the BSFA 1988 Lavondyss and Clarke 1989 Unquenchable Fire, skipping the BSFA 1989 Pyramids and Clarke 1990 The Child Garden, and also the winner of both 1990 BSFA and 1991 Clarke Take Back Plenty. Next up is Synners by Pat Cadigan. 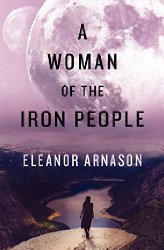