Take generous: the word originally meant well-born, and because it was obvious that well-bred people were magnanious and peasants were stingy, it came to mean munificent. Indeed, the well-bred gentleman established such a reputation for himself that the word gentle, meaning soft, was named after him. In fact, some gentlemen that the gin in gingerly is probably just another gen lurking in our language. Gingerly certainly has nothing to do with ginger.

A somewhat rambly book of etymologies, with some interesting nuggets (eg usages from Coverdale's Bible) but priding itself on having no real overall structure. Probably better for dipping into than trying to read as a single work.

This was the top unread book I acquired in 2015. Next on that list is Wolf in White Van, by John Darnielle. 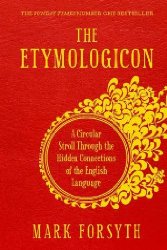