My mother’s parents – my ‘Nanny’ and ‘Grampy’ – were not individuals but a relationship. Their Christian names were irrelevant. They were ‘Mother’ and ‘Father’ to each other, and even my mother had to think twice before she could confirm that her dad was known, very occasionally, by his second name of ‘George’. Utterly familiar, they were also remote figures. I was one of a tribe of grandchildren who came and went in their house, played outside in their backyard, or fidgeted indoors while the grown-ups talked and laughed. Our illnesses mattered, and making sure that we survived, but otherwise, unless we were troublesome, we were a herd –‘the kids’. Before my teenage years I seldom held a conversation alone with either grandparent, and then only a few awkward sentences. I never stayed overnight in their house: why would I want to when my own was just up the road? I never went upstairs. Most of their house was out of bounds to me. Yet I must have been in the front room, a sanctum kept for visitors, bespeaking my grandfather’s status as a tradesman, for I remember the gleaming lacquered piano with its lid shut, and that I lifted the heavy receiver of the black Bakelite telephone, cradling it against my ear, listening in awe to the dialling tone as if to the distant sea.

This is a great work of social and personal history. Light has taken her four grandparents and traced the genealogy of each as far back as she can go. None of them were from the well-chronicled upper or middle classes; she remarks that if anywhere can claim to be her ancestral home, it is the workhouse, as someone from every generation ended up there. She gradually zooms in on Portsmouth as the focal point of the story, but not before travelling around the middle and south of England in general. Where there may be personal data lacking, she diverges into intense history of the disruptive effect of the Industrial Revolution on society, the precise details of needle-making, the life prospects of the building labourer, the reality of the Navy in the tweentieth century; and she humanises these sweeping sources of data with moving empathy for her own ancestors and their fellow citizens. It's a tremendous piece of work, both sad and uplifting, demonstrating that historical writing can almost completely avoid the great and the good and still be really memorable. Strongly recommended.

This was at the top of my list of non-fiction recommended by you. Next up was The Presentation of Self in Everyday Life, by Erving Goffman, which I have read but not yet reviewed. 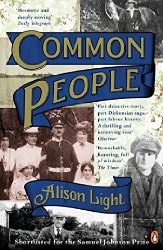