Second paragraph of third chapter (counting the introduction as the first chapter):

Then they all tried to talk at once, and Scooper banged the table with a maller to bring the meetings to order. Unfortunately his banging upset a bottle of water which fell right into Doughnut's lap.

My long term reader will remember that I wrote up the 17 episodes of classic children's TV show Here Come The Double Deckers last year. Here is the one and only book of the show, by script editor Glyn Jones, transforming to print two of the episodes that he wrote or co-wrote, first Barney, the 13th episode in broadcast order, and then Tiger Takes Off, the very first episode ever shown. It has lots of lovely colour photographs from the show, and is only 64 pages. The introduction has pictures of everyone including Albert as played by Melvyn Hayes.

The two episodes are rather odd choices, neither of them particularly plot-heavy even by Double Deckers standards; I wonder if it was just the two scripts Jones happened to have handy on a wet weekend in 1971 when he needed to write the book? It has to be admitted that Barney comes off rather better on the page than it does on the screen, with a bit more characterisation given to both Barney and the policeman (here named as PC Hastings). The core of Tiger Takes Off is the hovercraft chase, a long purely visual sequence which Jones wisely doesn't attempt to transfer to the page; most of the excellent dialogue is kept, and I can imagine kids reading this out loud to each other, each taking different parts.

This isn't the only Double Deckers book - there was a 1972 annual as well. Must look out for that. 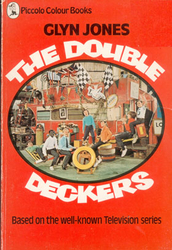