Second paragraph:I spotted this as an interesting feminist story from India in 1905 - in fact, it was originally published in English, in the Indian Ladies' Magazine, but I've put the standard Bengali translation next to it because I am intrigued that the English "lady" is translated into "ইউরোপীয় রমণীকে", "i'urōpīẏa ramaṇīkē," "European woman". I wonder if that is how the author intended it to be understood? (Of course she was probably more comfortable in Urdu than Bengali.)

It's a very short story in which Sultana finds herself in a world where men suffer the same discrimination that women suffer in our world, and as a result things run much better. Solar-powered technology has enabled Ladyland to repel male invaders and establish a new way of life, with decent showers and flying cars. Then, alas, Sultana wakes up; for it was all a dream. Begum Rokeya was a leading Islamic feminist writer, and the story is basically a thought-provoking vignette, with some shafts of wit - the fact that men's brains are bigger does not show that they are superior, because elephants have bigger brains than men. Great fun, but very short. 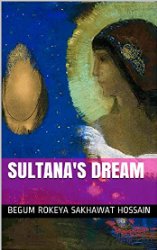