Anyone want to join me?

The horses walked on, blowing nervously, eager to be worked and eventually given their head on the open hills. Mortenhurze, in the lead, gave Purwell and Diana only the barest of formal acknowledgement, as befitted his status as Master of the Hunt. Paul, riding at the rear of his host alongside Estelle, gave a more cheery, slightly mischievous wave, before breaking into a gentle canter and riding away. Purwell watched Diana's bright unseeing wave gradually falter as the departing horses were lost to view across the bright shimmer of parkland. He stopped waving, and holding her arm, stood for a lingering moment, taking in the sunny welcome of the May morning. Her quiet face was gently uptilted to the almost cloudless sky as though drinking in its promise of greater warmth to come; she seemed quite untouched by yesterday's alarming incident, described so graphically to Purwell by his son. Diana had seemed more concerned about just how Todman had controlled the frenzied horse than the fact that her life had been in real danger. Thankful that the event was past and that Diana had come to no harm, he gave her arm an affectionate squeeze, and led the way into the cool recesses of the house.

I think some readers are of an age to remember the slightly incomprehensible 1978 BBC children's TV series that this books novelises - particularly memorable for Who fans in that it stars Sarah Sutton, a year or so before she became Nyssa, and John Abineri, who was in Doctor Who four times; and the writer of course was Brian Hayles, who wrote the four Ice Warrior stories of Old Who and also The Celestial Toymaker and The Smugglers. He died, aged 47, just before the first episode was shown (and before the book had been published).

The book sticks fairly closely to the TV story as I remember it (from first watching it in 1978 and again in 2010). It suffers a bit from the inevitable traps of novelising a script - basically, the omniscient narrator sometimes comes over as kinda dumb. But it's a decent recreation of a very weird story, which provoked happy memories.

This was the sf book that had lingered longest unread on my shelves, and also the shortest unread book of those acquired in 1989. Next on those piles respectively are Wild Life by Molly Gloss and A Crocodile in the Fernery by Twigs Way. 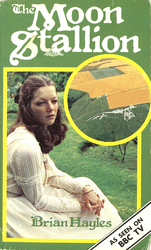