Saeed partly resisted the pull of his phone. He found the antenna too powerful, the magic it summoned too mesmerizing, as though he were eating a banquet of limitless food, stuffing himself, stuffing himself, until he felt dazed and sick, and so he had removed or hidden or restricted all but a few applications. His phone could make calls. His phone could send messages. His phone could take pictures, identify celestial bodies, transform the city into a map while he drove. But that was it. Mostly. Except for the hour each evening that he enabled the browser on his phone and disappeared down the byways of the internet. But this hour was tightly regulated, and when it ended, a timer would set off an alarm, a gentle, windy chime, as though from the breezy planet of some blue-shimmering science fiction priestess, and he would electronically lock away his browser and not browse again on his phone until the following day.

Niall Harrison got me to read this short book as preparation for a panel at Worldcon 75, and it was very interesting - in a world similar to ours, portals begin to open which allow people to travel instantly from one country to another; at first there are only a few, and access to them is tightly controlled, but as the story continues they become more common and eventually the whole world is interconnected. For Saeed and Nadia, this becomes first a means of escape from their home city, which is consumed in a Syria-style civil war, and then a way of encountering different parts of the world, where migrants are (mis)treated in various different ways - a Greek refugee camp, a neighbourhood of squatters in London, and finally California. This is leavened with vignettes showing how the changed world affects the lives of other people who we aren't otherwise involved in the narrative. It's a very convincing portrayal of a world which is both integrating and disintegrating, not so very far from our own.

I found it an interesting contrast with Chris Beckett's Marchers novel/collection, and with Dave Hutchinson's Europe trilogy, but of course from a non-European perspective. I was also reminded of Zelazny's Eye of Cat, where a global transmat system becomes a hunting ground for an alien tracking his Native American nemesis, and more frivolously The Seeds of Death. Recommended, anyway. 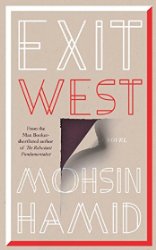