Second section of Part III ("Of Sir Lancelot, who abode in Benwick"):

There Lancelot     over leagues of sea
in heaving welter     from a high window
looked and wondered     alone musing.
Dark slowly fell.     Deep his anguish
He his lord betrayed     to love yielding,
and love forsaking     lord regained not;
faith was refused him     who had faith broken,
by leagues of sea     from love sundered.

This is minor Tolkien, an uncompleted epic poem about the end of Arthur's reign, not far from the version recounted by Malory - which I know only via T.H. White, who was working on The Sword in the Stone at about the same time. One would like to find a direct link, but Tolkien stopped working on The Fall of Arthur in 1937 and The Sword in the Stone was not published until 1938 (Tolkien had read it by April 1940) - and of course the later part of the Arthur legend was not reached by White until the complete Once and Future King came out in 1958.

The poetry is firmly rhythmic and alliterative - apparently R.W. Chambers, having been lent the manuscript, declaimed it with gusto to an empty railway carriage on his way back to London - and poor old Guinevere gets a lot more characterisation and agency than in most other versions of the story. But the most interesting part of the plot was never reached.

The poem itself is only 44 pages; the rest of the book is bulked out with essays by Christopher Tolkien (who is now 92) on his father's approach to the Arthurian legends, and on the links between the unfinished Fall of Arthur and the Silmarillion - in particular, the motif of the legendary figure who sails off into the West, which it is argued is drawn directly from Arthur and/or Lancelot to Eärendil and/or Tuor. Another parallel that struck me is that in the part I of The Fall of Arthur, the king is fighting enemies to the East.

Anyway, a nice addition to my Tolkien shelves. 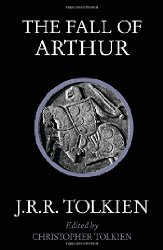